Google Earth puts a planet's worth of imagery and other geographic information right on your desktop. View exotic locales like Maui and Paris as well as points of interest such as local restaurants, hospitals, schools, and more. 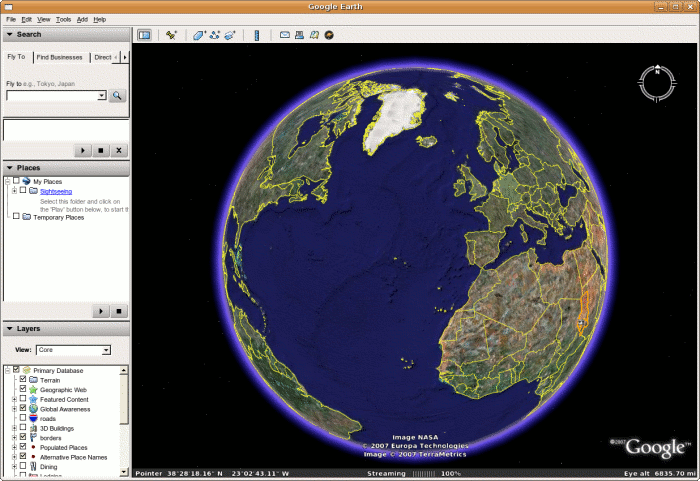 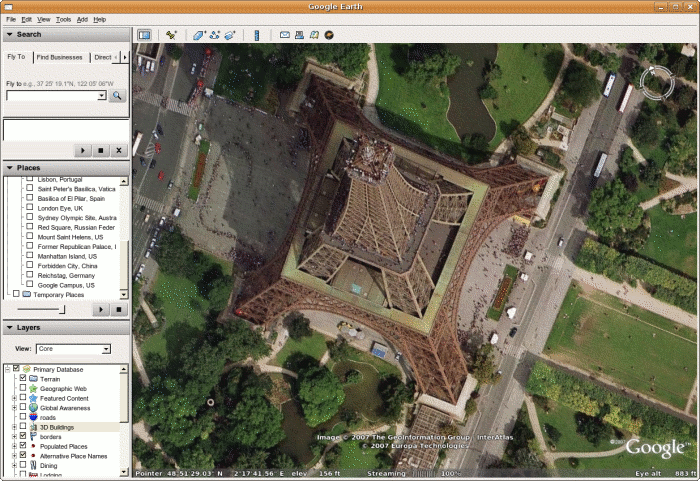 Installing the .deb file downloaded from the Google Earth Website

For earlier versions of Ubuntu that don't have the USC, it is preferred that you use gdebi installer:

You can uninstall Google Earth as any other package. From the terminal you can do it using the following commands:

If you installed Google Earth by a method that included running sh GoogleEarthLinux.bin (now depreciated), the unistallation can be done by pasting the following command in a terminal:

You may also wish to remove your user preferences folder, although this is not necessary if you intend to reinstall later. This directory contains Google Earth settings and the cache:

Google Earth for Linux is still in beta. As such, many problems that you may encounter can be attributed to this.

As with all OpenGL apps, Google Earth has issues running with Compiz. To resolve this issue, either run Google Earth in a normal GNOME session, or see this thread: http://www.ubuntuforums.org/showthread.php?t=176636

Some people using the ATI fglrx driver have experienced a problem where Google Earth freezes at the splash screen and never starts up. See this post for a solution: http://n01getsout.com/blog/2006/11/21/google-earth-for-linux-freezing-with-ati

Ensure that you video driver has 3D acceleration enabled. Display Hardware Drivers by selecting System -> Administration -> Hardware Drivers Select the Enable checkbox next to your graphics card. This may require a system restart.

You may also install other 32bit libraries. Note that google does not provide a 64 bit version of Google Earth. Thus installation on x64 system will take some extra efforts.

If the installer was started with sudo, googleearth will be started as root, but still using the home folder of the normal user (who started sudo). Thus Google Earth will place its configuration files into the user's home folders, but with root as the owner. The normal user cannot use Google Earth, because the settings cannot be saved. The display will not contain a globe, but only a black space and some settings will be grayed out. To fix this problem, delete the Google Earth configuration directory:

This version has Qt libraries that appear to be old and incompatible, causing crashes. The stack trace will include: libQtWebKit.so.4(+0x747d18)

To fix this, install the repository's libQt libs:

Then remove the bundled libs (assuming the default installation location):

There is also apparently a buggy version of libfreeimage. The stack trace will include: libIGGfx.so(+0x1296c9)

then to start Google Earth:

After these, Google Earth worked very well on my system (ATI Radeon accelerated, Compiz off).