All GRUB references on this page refer to GRUB 2 (version 1.97 or later) unless otherwise noted.

This guide will detail how to:

Additionally, examples of GRUB 2 menuentries for other operating system and utility CDs are provided on the Grub2/ISOBoot/Examples page.

The user should decide beforehand which ISO to download. The Desktop version is available in 32-bit and 64-bit versions. The 32-bit version (-i386) will run on a 64-bit computer, but a 64-bit version (-amd64) will not run on a 32-bit computer. There are also Server versions, as well as an Alternate CD version for users having special requirements or using RAID and/or LVM.

Ubuntu CD/DVDs can be downloaded from the official Ubuntu site: Ubuntu Download page. Links to installation help and alternative download sites are accessible from that page as well.

The Ubuntu default download location is normally to the user's Downloads folder, but the ISO may also appear on the Desktop or another location defined by the user. The Desktop version filename for officially released versions of Ubuntu uses the format of ubuntu-XX.XX-desktop-amd64.iso for the 64-bit version and ubuntu-XX.XX-desktop-i386.iso for the 32-bit version, with XX.XX being the release number (such as 12.04, 11.10, etc).

Once downloaded, the user must decide where to store the file. Typically, the ISO CD image is approximately 700 MB, while the DVD version is even larger. Storing it on a non-system partition should be considered if space is limited on the system (/) partition. Additionally, users making system backups might wish to exclude the folder in which the ISO is stored if the file remains on the system (/) partition.

For purposes of this guide, the ISO will be placed in the user's Downloads folder (/home/username/Downloads).

Note: Storing the ISO file in /boot is not recommended if you are using a small, separate /boot partition.

There are several methods the user can employ to examine the contents of the ISO file. Viewing the folders and files contained in an ISO can help determine menuentry path designations and the names assigned to system folders and files. The two most important files contained on the ISO, for building the menuentry, are the kernel and the initrd image. These files reside in the casper folder on a standard Ubuntu ISO. The kernel link is vmlinuz and the image file is initrd.img.

On other bootable Linux ISOs and utility CDs, these files may be located in other folders and may be named differently (vmlinuz0, initramfs, etc). Note that some non-Ubuntu ISOs contain an initrd image with a .gz extension rather than the .lz extension now used by Ubuntu.

Archive Manager/File Roller is a GUI application which can inspect the contents of an ISO file. Archive Manager can be started in the following ways:

The user can mount the ISO image via a terminal and then inspect the contents via commands or opening a file browser. To mount the ISO via the terminal:

GRUB 2's terminal operations permit exploring the contents of partitions and ISO images. The following GRUB commands may be helpful if an error message is generated after attempting to boot an ISO menuentry:

To mount an ISO via the GRUB terminal, determine the location/path of the ISO file, then:

There are several methods to create a GRUB 2 menuentry which will boot an Ubuntu ISO. Two options are provided below - using the grml-rescueboot package to automatically create the menuentry, or manually editing the GRUB 2 configuration scripts/files.

There is also a method to create USB [multi]boot pendrives (almost) automatically, grub-n-iso_multiboot.

A very simple way of creating a GRUB menuentry for a bootable ISO file is to use grml-rescueboot.

The package does the following:

To use the grml-rescueboot option:

A simple way to create a USB [multi]boot drive including the grub bootloader and the GRUB menuentries for Ubuntu ISO files is to use grub-n-iso_multiboot with the shell-script file mk-grub-n-iso. It does the main part of the work automatically with the help of a couple of files for the configuration of the booting system.

The shell-script is made to be easy to use, but it helps if you have some experience with terminal windows and command lines.

Make a USB pendrive that can boot (almost) all PCs

It is possible to create the pendrive in either UEFI mode or BIOS mode, and the two grub installations are simply done with two different command lines.

This tool works in an Ubuntu family operating system of version 14.04 LTS or newer. (It is possible to use Ubuntu 12.04 LTS too, but it has an older version of grub, and this method works only for BIOS mode.)

using links in the directory 'grub-n-iso_multiboot' to the target iso files. The only manual tasks were to answer a few questions (one-character replies), and the use gparted to edit partitions according to guidelines by the script itself (partition sizes, file system types: fat32 and ext2). 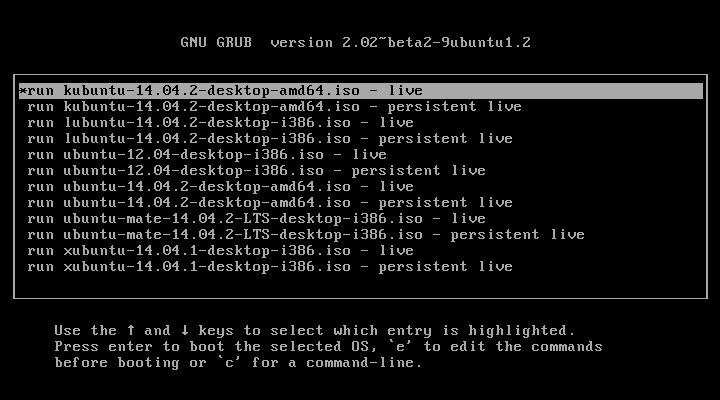 It is rather easy to create a separate (USB) boot drive using ISO boot alias grub-n-iso from a template. This can be used

The 'basic method' is described at the following link, ../../Installation/iso2usb/isoboot

Another way to create a GRUB menuentry is to add it to the /etc/grub.d/40_custom file. Add the menuentry below the existing lines in the file.

The following is an example GRUB menuentry for Ubuntu 12.04's 64-bit ISO, located in the user's Downloads folder of sda5.

Updated releases of Ubuntu 12.04 and later may designate the 64-bit kernel as vmlinuz.efi. This file is still located in the /casper folder. When creating the menuentry, use vmlinuz.efi rather than vmlinuz in the linux line for the 64-bit version.

The menuentry constructed above is built with the following considerations.

If the ISO is stored on a partition formatted differently than your main operating system, it may be necessary to load the module for the specific format before GRUB can access it. In this case, add the following line immediately after the menuentry line for the desired format (ntfs, reiserfs, etc). It should not be necessary, but if GRUB cannot read the ISO the iso9660 module can also be loaded:

Once the menuentry has been created and GRUB 2 updated, the ISO entry will appear on the GRUB menu during boot. If the entry was created in the /etc/grub.d/40_custom file, it will appear after the Ubuntu and other OS listings on the main GRUB menu.

To boot the ISO, highlight the entry and press ENTER or F10.

If the menuentry was created using grml-rescueboot, once the ISO is selected from the menuentry additional options such as "Try Me" or "Install" will be presented before booting.

Booting without a GRUB Menuentry

Although GRUB 2 must be installed and working, it is not required to have a menuentry in order to boot the ISO. Booting can be accomplished from the GRUB prompt by manually typing in each command in the menuentry example (except the menuentry title line).

Booting via this method is not persistent. The commands need to be entered on each subsequent boot until a menuentry is created in the GRUB menu.

There are a variety of reasons why a menuentry may fail to boot the ISO. Since the Ubuntu ISOs are standardized, the most likely reason is an incorrect path in one of the menuentry lines. Another likely problem is mistyping the ISO filename - for instance using a - rather than a _ or using the wrong version number.

The following steps may help identify the problem:

Installing Ubuntu from a Menuentry Boot

To Install Ubuntu from an ISO Menuentry, use the procedures previously discussed to:

Once booted to the Ubuntu LiveCD desktop:

GRUB 2 can boot the ISOs of many Linux operating systems and rescue CDs if they were built with this capability. The filenames, locations and kernel options vary widely and it can be difficult to determine the exact commands necessary to boot these ISOs.

An Examples page has been created to allow Ubuntu contributors to provide known, working menuentries for the ISOs of popular Linux and utility discs.

Additionally, the user can search the Internet for menuentry examples or seek advice in forums specializing in the specific OS or utility.

In addition to booting directly from an ISO menuentry or a bootable CD/DVD, there are also applications which can install the contents of an ISO onto the user's hard drive. These utilities copy the necessary system files into a folder on the partition designated by the user and can create a menuentry to access these files.

One such utility compatible with Ubuntu is UNetbootin. UNetbootin is available via the Ubuntu repositories and Launchpad. Once UNetbootin extracts/installs the ISO files of an operating system or utility it generates a new item in the GRUB 2 menu.