LVM (Logical Volume Manager) places an abstraction (a layer) between the physical hardware and the required partitions. It has a number of benefits, which include the following. (Newbies: You don't have to know this.)

LVM has the further benefit that your partitioning system is hidden (via LUKS) from someone with physical access to your computer but your not passphrase or password.

You can split a physical partition into several virtual ("logical") partitions; and you can combine several partitions into a single logical one. The way we use here it is illustrated by the following diagrams.

In the diagram, we have a system with four partitions. The first one, called the ESP (EFI System Partition), cannot be encrypted because the computer has to have something to work with when trying to boot, and the ESP is it. (On the other hand, the hardware watches for changes to the ESP. Although it's possible to add malware to the ESP, it's difficult.)

We want the other three partitions to be encrypted.

2.2. The system with LVM, ignoring encryption

Here, you see our intended structure, but before LUKS has been added. The three partitions to be encrypted are combined physically into a single partition. To any application, though, they appear to be three separate partitions. 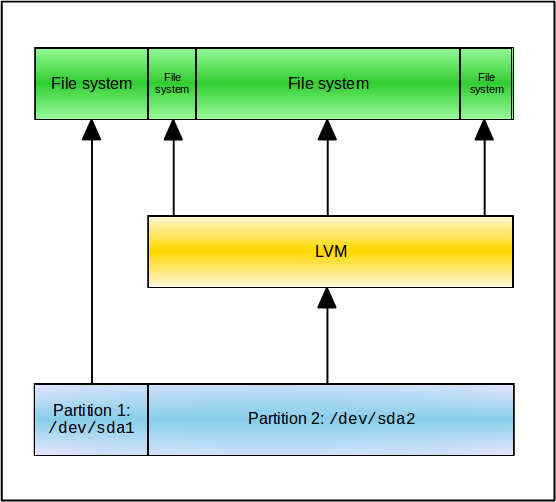 2.3. The system with both LUKS and LVM

We have added LUKS to encrypt the entire system (apart from the ESP). When the partition is locked, no one can tell that there are multiple partitions or that LVM is in use, much less view the contents.

Any application, though, does not know that the partitions are logical or that the entire underlying structure is encrypted. 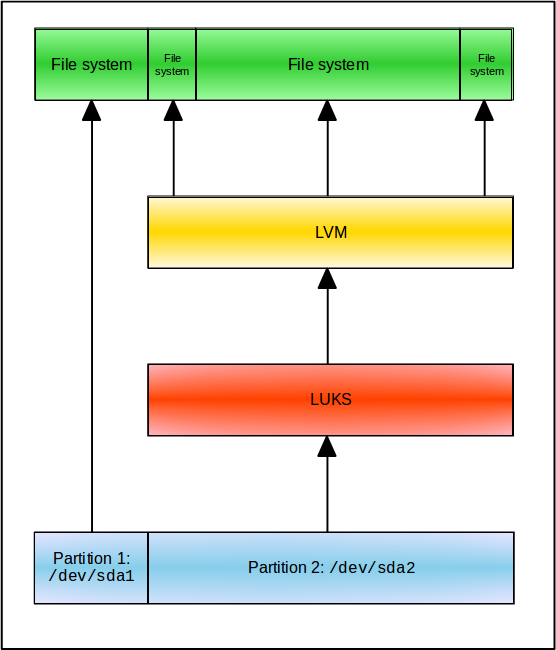 If you prefer a GUI to the command line, there is an app called Logical Volume Management. Install system-config-lvm from your favourite package manager.

The GUI is not required, and we won't use it during the installation.