Onboard and MouseTweaks during GDM

Remark: The following instructions are valid for Ubuntu up to Ubuntu Jaunty (Ubuntu 9.04) included. Ubuntu karmic (Ubuntu 9.10) and beyond are shipping the new GDM that behaves differently. By the way, the new GDM offers a way out of the box to start the onscreen keyboard; but it does it not for dwelling yet.

People using an Ubuntu distribution up to Ubuntu Jaunty (Ubuntu 9.04) included, can set up a way to start the onscreen keyboard named onboard during their GDM session.

Moreover, if they cannot click with a hardware button, they can also set up a way to start mousetweaks in their GDM session. (Mousetweaks is a program that issues automatic clicks without the user pressing any mouse button; this fonctionality is usually called dwell click.)

Please, have a look at the following picture to see onboard and mousetweaks run alongside the Plain interface (also called greeter) of GDM: 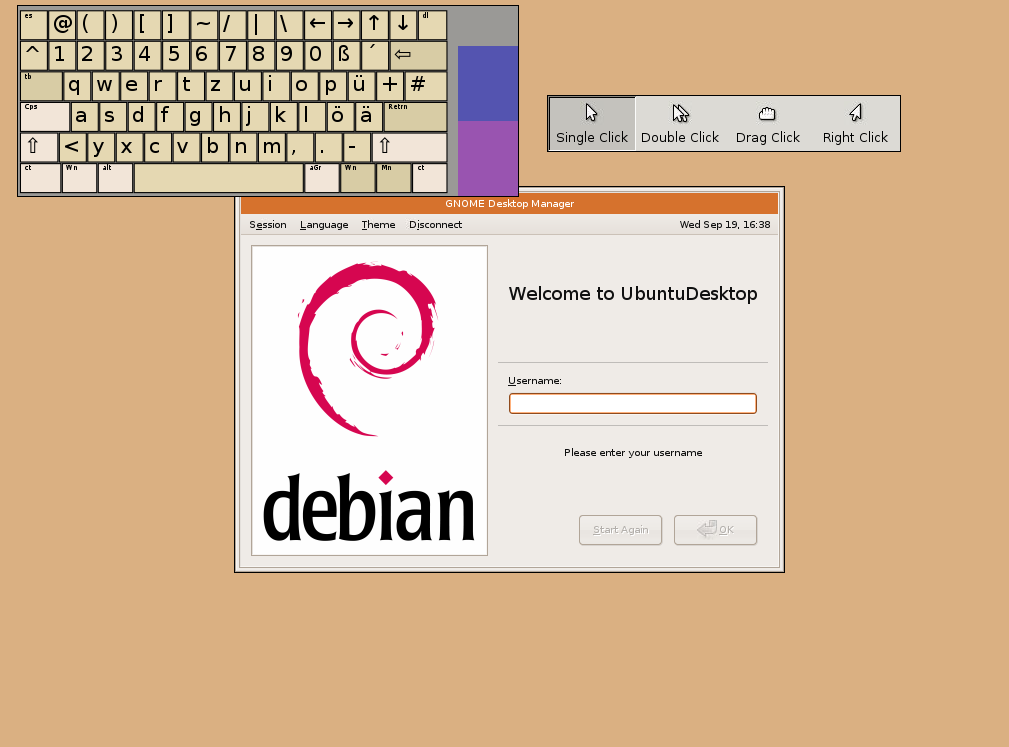 Remark2: I have filed the following Request For Enhancement bug to make onboard and mousetweaks also available for the themed greeter: https://bugs.launchpad.net/ubuntu/+source/gdm/+bug/130368

Install Mousetweaks and an updated version of onboard

Note: If you are using Ubuntu 8.04, you should skip this step. In fact, the default installation of Ubuntu 8.04 already contains versions of onboard and mousetweaks that are appropriate to be used during GDM.

For this to work, you need onboard version 0.88 or above, but Ubuntu 7.10 comes with version 0.87. Moreover, Mousetweaks does not yet ship with Ubuntu 7.10. So, you have to install both softwares, if you want to use both. You can install them with the Synaptic Package Manager, once you have added new entries to the Software Sources preferences. Please continue reading for more details about how to proceed:

The author of onboard was so kind to provide a Personal Package Archive (PPA) from which you can install onboard 0.88 for the i386 and amd64 architectures.

In order to use it, do the following: Open the Software Sources preferences (which is located in the menu System->Administration), choose the Third Party Software tab, click on the Add... button, paste the following line into the APT Line field and confirm it by clicking on the Add Source button:

Then, do the same to also add the following entry to the Software Sources:

After closing the Software Sources preferences, you can use the Synaptic Package Manager to install onboard 0.88~ppa in the same way you do it for other software. Please, install it

By the way, onboard is hosted on Launchpad: 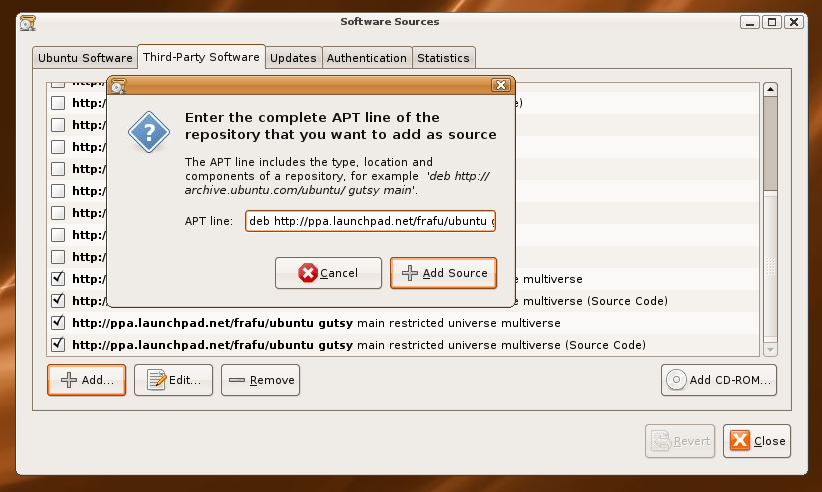 Mousetweaks is a new utility whose implementation has begun this summer as a GSoC 2007 project for Ubuntu by Gerd Kohlberger. It is not part of the repositories of Ubuntu 7.10 yet; but it is planned to become part of it.

For the meantime, I have prepared a Personal Package Archive to make its installation easier for Ubuntu users with i386 and amd64 architectures. After adding the following 2 entries to the Software Sources, Mousetweaks will also be available for installation by the Synaptic Package Manager.

By the way, the Mousetweaks project is hosted on launchpad under the following link:

If the Accessibility features are enabled for the Login Window, the plain greeter steadily monitors the movement of the pointer in the background. When it recognises a gesture that has been defined in the gesture configuration file, it starts the application associated with that gesture:

Open a terminal and type the following to open the gesture configuration file:

The following line defines a new the gesture and associates it to onboard:

Please add it above the following line that is already in the gesture configuration file:

Save and close gedit.

Similar to onboard, the following line defines another new gesture and associates it to mousetweaks. Please add it to the gesture configuration file; right below the line for onboard:

For GDM to monitor the pointer for gestures, you have to configure it to use its plain greeter and enable the accessibility features. The Login Window under the menu System->Administration of the normal gnome session allows you to perform the appropriate configuration. 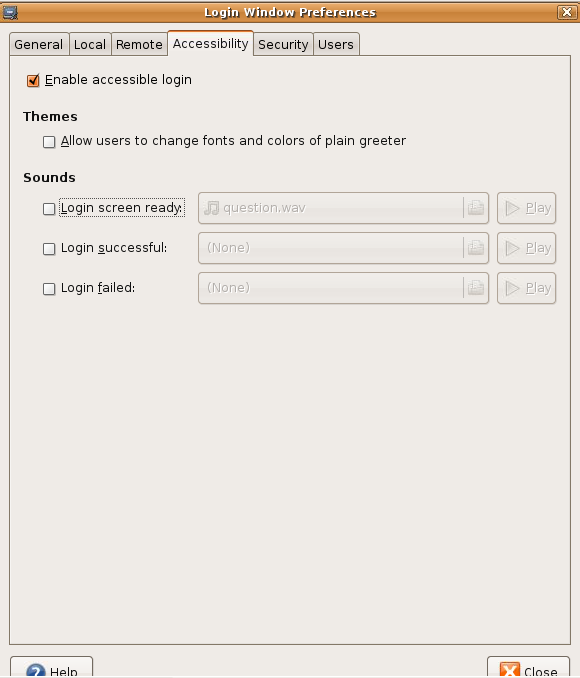 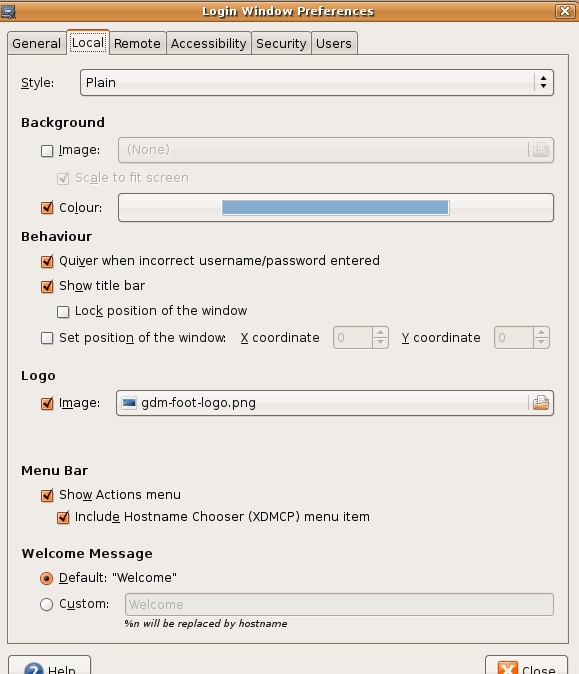 How to start onboard during GDM

During the GDM session, a background process steadily monitors the pointer to detect determined gestures that are associated with specific programs. On the following picture you can see the gesture that the pointer has to perform in order to start of onboard: 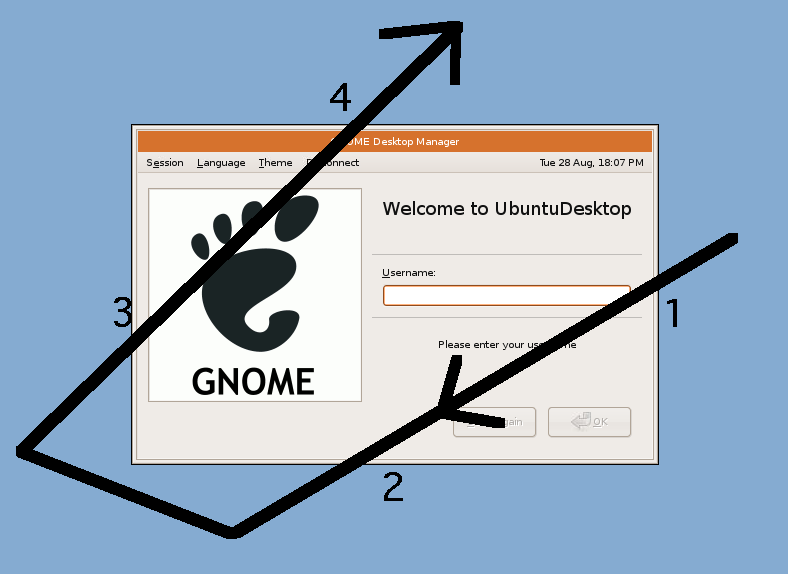 What matters in the gesture, is:

For onboard this means:

If no more than 10 seconds elapse between two consecutive edge crossings, onboard will appear at the top-left of the screen.

How to start mousetweaks during GDM

It is also possible to start dwelling with a gesture during the GDM session. (provided the gesture has been defined, that Assistive Technology has been enabled for GDM, and that the Plain theme is used)

Gesture to start mousetweaks for dwelling: 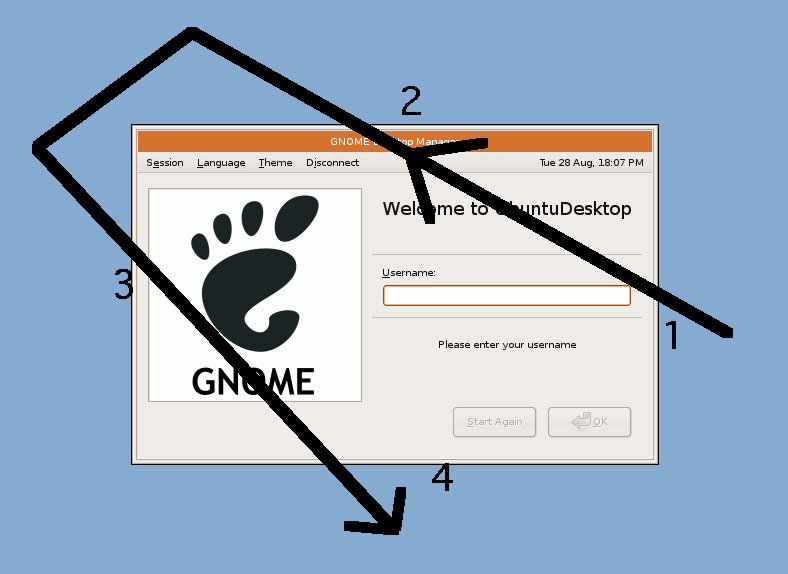 For explanations about how to interprete this picture, please have a look at the Starting of onboard above.