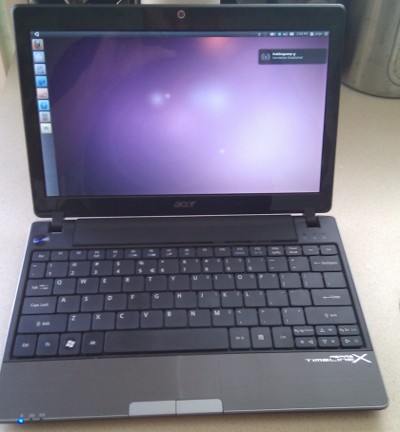 This page aims to describe the steps needed, to fully enable all features of the 1830T when using Ubuntu 10.04, 10.10, 11.04 . Please feel free to add your information to make this page as accurate as possible!

Ubuntu 10.04 supports some hardware components of this netbook.

In one hardware configuration all hardware except the ethernet card is supported. Sound is fully supported. WLAN support works right away. In the system menu, scrolling with the touchpad easily can be configured. Due to the dual core processor, Ubuntu runs with excellent performance on this netbook. Watching movies in HD for example is not a problem, as this netbook is basically a real laptop in a netbook body.

This laptop doesn't have bluetooth or a 3G card in the configuration I purchased (the 68U118 does have Bluetooth).

In another configuration (of the AS1830T-3721), the Broadcom wireless card requires manual installation of restricted drivers. The Atheros ethernet card requires compilation of Atheros source drivers. The ALPS Touchpad is seen as a PS/2 Mouse under Lucid, and neither vertical one-finger edge scrolling not any two-finger scrolling is supported. A third-party psmouse.ko (https://bugs.launchpad.net/ubuntu/+source/linux/+bug/550625/comments/152) allows vertical one-finger scrolling, but no multitouch. Fan control is not supported; the fan runs at a low setting, but temperature under Lucid is higher than under MS-Windows. Power consumption is also higher than under MS-Windows. Bluetooth works with kbluetooth installed. Other hardware works. --

Ubuntu 11.04 supports most of the Hardware (AS1830T-5434G32NKI) OTB except of the internal Microphone. Broadcom Wireless requires manual installation of restricted drivers and a few steps listed under "Wireless Networking" to solve a few Bugs.

Ubuntu 11.04 on 1830t-3721 wifi works well and has no suspend/resume issues after the acer-wmi is blacklisted. See Powersave/Network Manager section below for how to do that. Internal microphone not working (yet).

A Quick Guide and the Generic User Guide from Acer can be found on the NTFS partition in the folder book.

It is recommended to keep a Windows installation on the netbook. It is at least needed for BIOS updates.

Closing the lid will suspend and resume the laptop perfectly, except the network manager will crash; in some cases Wireless will not work at all. To fix this bug:

Press Alt+F2 or open a terminal and excute

Microphone (From the 1810TZ page, check)

(For Ubuntu 11.10 beta2, Microphone works OTB.) For 10.04 and 10.10 Install the package "linux-backports-modules-alsa-karmic-generic" with the synaptic package manager and the internal microphone should work. (in the Ubuntu system menu under "System" > "Administration" > "Synaptic Package Manager").

To use the terminal to achieve the same thing type :

Some microphone amplification can be achieved using the sound preferences (in the Ubuntu system menu under "System" > "Preferences" > "Sound" and then access the input tab).

dmjm reports that for Ubuntu 10.10 on 1830T-3712, internal microphone works out of box but some static. dmjm says it was acceptable for Skype use. Anyone got a fix they can report here? Tried this without success:

Internal MIC with Skype (From the 1810TZ page, check)

To use the internal mic with Skype, start Skype with

dmjm asks: How do we make these settings persist after logout?

On 1830T-3712, brightness adjustment works fine in Ubuntu 10.10 although I'm pretty sure the icons on the keyboard for dimmer and brighter seem to be reversed.

The brightness adjustment (for which model?) fires off a notification when you use the keyboard but the screen never dims, it runs at full brightness. Echoing the brightness_switch_enabled trick from the 1810T doesn't appear to work on the 1830T (Need to investigate)

Adding the option "acpi_osi=" to the kernel options in grub.cfg solves the brightness issue (at least in ubuntu 10.10):

If your ethernet isn't working on the 1830TZ-U544 model try tweaking the Grub Command Line as posted here: http://ubuntuforums.org/showpost.php?p=8446793&postcount=12.

Someone reports (1830T-3721) Ethernet worked out of the box but the Broadcom Wifi needed proprietary drivers installed. Bluetooth seems to be detected.

dmjm confirms drivers installed fine on 1830t-3721 with Ubuntu 10.10 but that wireless network was very slow (virtually unusable NFS). He fixed this with:

dmjm reports this does not appear to be needed with 11.04 on 1830t-3721. Wireless networking seems to be lots faster in general.

The slot for the SIM-card for the mobile internet connection is located under the battery (Picture from netzwelt.de). The internal modem is basically supported by Ubuntu. If it is properly configured, it can be used alongside with other network connections like WLAN.

However with 10.10 one problem is that a wireless network connection is doubly turned off when you resume (Broadcom BCM43225 wifi). To reenable you need to tick on Wireless Network in Network Manager and hit Fn+F3 once or three times (!). Fn+F3 seems to cycle through 4 modes corresponding to Bluetooth/Wifi being on/off. Every time you suspend/resume it seems to cycle automatically through one mode. A fix for this would be nice!

dmjm added a script to enable wifi always in Network Manager (you still have to do the Fn+F3 stuff though). You might not want this if you use your laptop on aircraft (although it still has no effect in terms of connecting via wifi till you hit the FN+F3 keys).

Christof Krüger proposed to use rfkill commands in the 20_wifi_on file. This should automatically enable the WLAN module without the need to press Fn+F3 any more. dmjm added a test for resume after noting that plugging in power cord also brought about a 30 second reconnect.

The number of seconds to sleep between using rfkill and nmcli seems a bit random and there might be a more elegant way of doing it.

dmjm confirms this fix works for him (thanks Christof!) though he is seeing a 30 second delay before reconnect to wifi succeeds on resume. Sleep is set at 2 seconds in 20_wifi_on. Relevant lines from /var/log/syslog are

Note that suspend/resume behaviour is marked as a TODO against the brcm80211 kernel source. See http://wireless.kernel.org/en/users/Drivers/brcm80211.

This information is copied from the initial post http://ubuntuforums.org/archive/index.php/t-1341325.html by Patrick Vogeli

By default, an ubuntu install won't take too much care of saving power, which is very important in an ultra mobile laptop. You can easily setup the system to enter some power saving modes, specifically the sata controller and the sound chip.

I've setup a script which will take care of making the devices entering the power saving mode when the laptop is on battery.

To install this power saving script, do the following:

# Paste the script above into the file, save and close

Lm-profiler: Last, but not least, we'll run lm-profiler to start / stop services when running on battery. To do that, disconnect from the mains and open a terminal (Aplications -> Accessories -> Terminal) and run sudo lm-profiler. It will run for 10 minutes and, when finished, it will ask what services to disable / enabled. You can safely disable cron, anacron and atd, if you don't use them. If you don't know what those are, you can dissabled them. If you never use a printer, or you only use it when connected to the mains, you can also disable cups. If in doubt, don't disable.