Disk Usage Analyzer, formerly known as Baobab, is a graphical disk usage analyzer for the GNOME desktop environment. It was part of gnome-utils, but has been a standalone application since GNOME 3.4.

The software gives the user a graphical representation of a disk drive's contents. The interface allows for selection of specific parts of filesystem so a single folder, the entire filesystem, and even remote folders and filesystems can be scanned and listed at folder level.

The graphical representation can be switched between a 'Rings' chart and a 'Treemap' chart to suit the content being viewed.

These screenshots show an older version of Baobab than is currently available in Ubuntu. 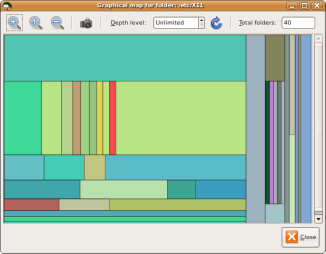 Baobab is not installed in Ubuntu by default. It can be installed by issuing the following command in a terminal window:

or by using a package manager such as 'Ubuntu Software' or 'Synaptic'.

On launching Baobab a list of locations is shown, typically the Home folder, the root folder, other mounted partitions and remote locations such as Google Drive. Selecting a location lists its contents in the left hand panel by displaying the size, contents (number of items) and modification date of each folder.

Selecting a folder will display its contents in a graphical form in the right hand panel as either a 'Rings' chart or a 'Treemap' chart depending on which type of display has been selected. Hovering the mouse pointer over each segment of the chart displays a tooltip showing the folder name and its size.