A DHCP server not managed by Cobbler has to be configured so to answer to bootp queries serving the pxelinux.0 boot file.

To deploy using cobbler in Bare Metal machines, we simply need to enter to the BIOS configuration and set the system to boot from LAN, or PXE, depending on the BIOS itself.

Once this is done, reboot the machine and a list of available will be provided.

To deploy Virtual Machines using the imported ISO profile through cobbler, we simply need to create a new Virtual Machine and specify that we are PXE booting. However, we need to consider that PXE will only work in KVM when using a bridge interface, typically br0.

Once the Virtual Machine is created, it will boot and search for the PXE server through the network. Once it is found, it will provide with the list of available profiles to install. We simply select the profile we would like to install to be able to proceed with the installation. These profiles are shown as follows: 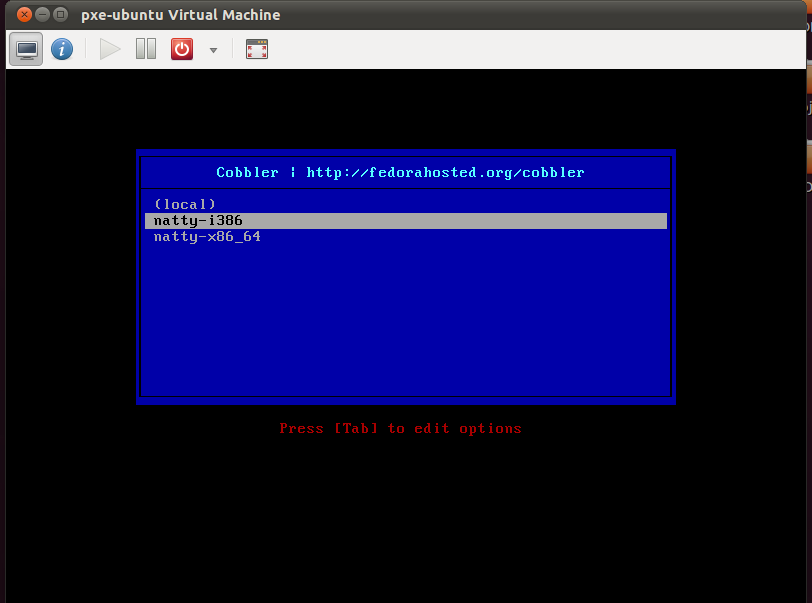 Koan, is a helper program provided along with cobbler to be able to install virtual machines in a host server, as well as perform some other tasks. The first thing is that we need to install koan in the host machine for the Virtual Machines:

Once installed, the command to be used is simply koan:

However, it requires a set of options. Some of these options are:

The first thing to do is always determine what Ubuntu distribution, release, and/or architecture we would like to install. For this we need to list all the available profiles in the cobbler server. We do this as follows, assuming the IP address of our cobbler server is 192.168.1.2:

The command will provide an output similar to:

Once we have determined what profile we would like to install, we do as follows to proceed with the installation:

One this is executed, koan will utilize virtinst to create and launch the Virtual Machine. The installation will proceed normally.