This project appears to be dead since 2009.

Gladex is a program written in Python that takes a Glade XML file and generates code. see Gladex for further details.

There are currently no Ubuntu packages available. However, a Ubuntu package is scheduled to be released in September 2007. Until then, to use Gladex you will have to download the appropriate tar archive from https://launchpad.net/gladex/+download, unarchive it and run the execute the appropriate file directly. Gladex is written in Python, so you will not need to compile anything.

To download releases go to https://launchpad.net/gladex/+download and download the highest 0.2 stable release (Python only) or the highest 0.3 development release.

Gladex development is hosted in a bzr repository at https://launchpad.net/. You can find the main development branch "trunk" and any other branches at https://code.launchpad.net/gladex/. Click on any of the branch names for download instructions for that branch.

To download the latest code type at the command line:

The 0.2 release is not nearly as advanced as the 0.3 development series. Series 0.2 only supports the Python programming language while 0.3 supports Python and Perl. 0.3 will also have Ruby support, but it does not work as of 2007-08-18.

The two series are different enough such that two tutorials are warranted. When following either of the two proceeding tutorials you should backup your .glade file just in case a bug in Gladex eats it.

After starting Gladex you will see the application window below. 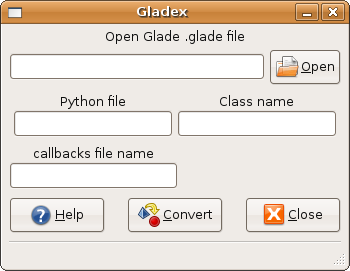 Select a Glade file by clicking on the "Open" button. A file selection dialog will appear and display only directories and files ending in ".glade". After you have selected your .glade file the empty fields will be filled with information as shown in the example below. You can edit any of these fields if the defaults are not ideal. 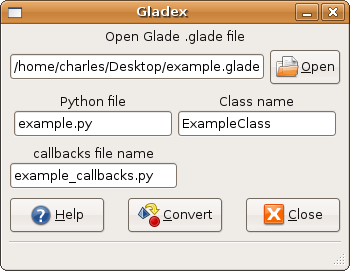 Once all the fields are to you liking, click "Convert". In our example clicking "Convert" produces three files in the same directory as your .glade file resides: