Warning: This page is mostly obsolete, see WifiDocs/Driver/prism2_usb instead.

This howto will setup wireless networking using the Netgear MA111 wireless USB adapter or many other wireless USB adapters which use the WifiDocs/Driver/prism2_usb driver. This card is pretty easy to setup since Ubuntu 5.10, as the driver module is present in the kernel.

The Prism2 chipset was one of the first wireless devices to work in linux. Unfortunately, that means that it never became part of the wireless tools infrastructure that was being developed at the same time and does not work in the same way as all the other wireless cards.

First, plug in your MA111 USB wireless card and see if it is detected and the appropriate modules are loaded. Open up a terminal and execute the following command

If you see an output similiar to this, your card has been detected and appropriate modules loaded. If not, you probably have a card with a different chipset than prism2_usb.

Since the driver does not support wireless extensions completely, we have to install the following package. You will find this package on the install cd. If you installed from the Ubuntu 6.06 Desktop (live) CD, you will have to add the repository on that CD to your package manager's list. It is as simple as inserting the CD and clicking on the box that appears on your Ubuntu desktop to do this. Alternatively, from the command line, you can run

If you installed your Ubuntu system from the Ubuntu 6.06 Alternate (install) CD, these packages are already part of your repository list, and you do not have to add them to your list again.

Open up the file /etc/network/interfaces in your favorite text editor. Add the following lines to it (replace your_essid and xx:xx:xx:xx:xx with your network name and WEP key): 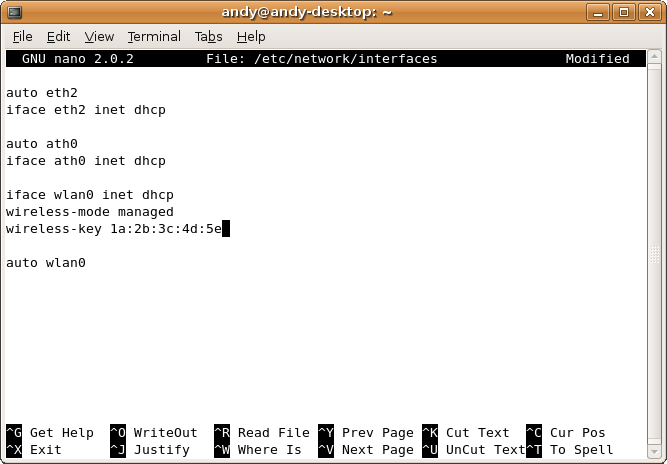 Unplug/replug your wireless card or reboot your system. After it boots up, check if your wireless works. The network connection should be made automatically every time you insert the device. You may try to enable the connection by hand by issuing the following commands:

This should ensure that you are connected to the network.