Remember, your machine may vary so be sure to use the commands shown in the "The basics" section right below.

Note: this guide has been tested for sharing connection between : 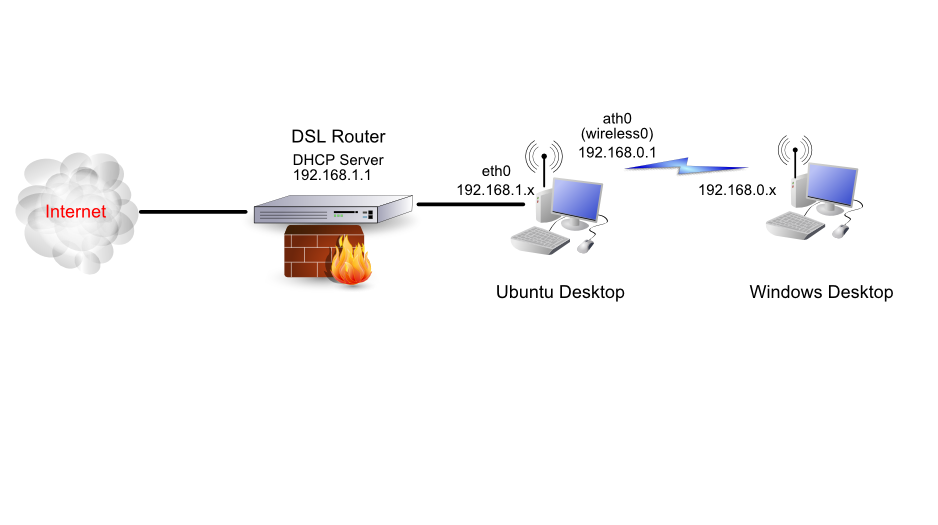 Note: This diagram was created with inkscape. If you want to edit it download the full file ics.svg from: More Actions->Attachments

For getting your wireless card info, open a terminal and use these commands:

Here we'll configure who is going to share the Internet connection (our desktop PC with the two cards installed). First, we need to have some concepts and rules in mind:

If you haven't yet, it's time to stop the Network Manager:

Once stopped, we shall proceed to edit our /etc/network/interfaces file.

Your network configuration file will look similar to this one:

For the sake of this example, we only have two network cards, so I'm gonna simplify the example by removing the interfaces we won't use from the file. You can happily do your modifications without deleting them.

We need to think how we'll set up our network. We'll do it this way:

Note: You might need to think up another IP address for it if you're on a large network. Else, just leave it like that.

For sharing internet through the wireless with those settings, our interfaces file will end up like this:

Note: Remember to replace wireless0 with your network adapter's name, which you can get by typing in a terminal:

That done, we can restart networking to get the device ready:

After that, we'll fire up Firestarter:

If everything went good, it should say Firewall Started. If not, please refer to the Troubleshooting section, else, we're done here.

This is relatively easy. When you have your wireless card working (it should blink its led lights, or at least turn on) and you've set up the server correctly, all you have to do is this:

Your laptop should have Internet now. If anything went wrong, check the Troubleshooting section, as always.