Text Editor (gedit) is the default GUI text editor in the Ubuntu operating system. It is UTF-8 compatible and supports most standard text editor features as well as many advanced features. These include multilanguage spell checking, extensive support of syntax highlighting, and a large number of official and third party plugins.

gedit is suited for both basic and more advanced text editing and is released under the GNU General Public License. 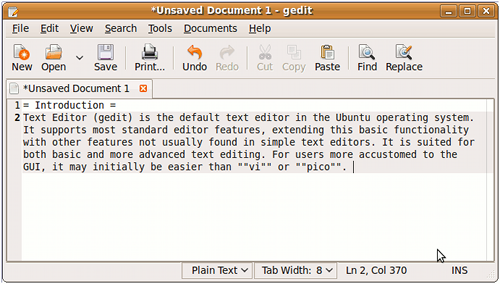 gedit is located in Ubuntu's Main repository and is installed by default. gedit can be installed in Kubuntu, Xubuntu and other distributions although additional libraries are necessary and will be installed on non-GNOME systems.

Several popular options which the user may wish to review after the initial installation are:

Plugins greatly enhance the power of gedit and are are accessed via Edit → Preferences → Plugins. More than a dozen plugins are pre-installed and can be enabled/disabled in this section. Some of the most popular are enabled by default while others must be enabled by the user.

For descriptions of standard plugins distributed with the gedit package visit this link.

Many additional plugins are available from third-party resources. See the Links section near the bottom of this page.

A very useful feature of gedit is the ability to color programming code. Using syntax highlighting makes simple errors easier to recognize. gedit uses the GtkSourceView for syntax highlighting. The .lang file for a specific programing language is located in the /usr/share/gtksourceview-3.0/language-specs/ folder. These files may be edited or additional files created to further define the highlighting definitions.

Syntax highlighting is automatic and is selected in one of two methods. It can be chosen via the menu with View, Highlight Mode or via the lower statusbar. The statusbar, enabled via the View menu, displays programming language options for many types of sources, scripts, markup and scientific formats. A screenshot of the statusbar in use is located further down this page.

gedit provides a user-friendly way to make XML markup or Docbook XML for yelp and ubuntu documentation. The pictures and instructions given below use gedit 2.26.1. The recommended changes help take full advantage of the syntax color highlighting which gedit provides.

Experiment with gedit's settings and markup in general to have a feel of what works best for you.

If the user is experiencing problems with gedit, it may be preferable to first reset the user's preferences by removing the user's .config/gedit folder rather than attempting to remove the entire application and the ubuntu-desktop metapackage. Learn more about Ubuntu's MetaPackages.