Starting with version 9 there are separate versions for

This avoids some complicated logic and makes the code smaller. The text version is good for servers and for users who do not want eye-candy. The improved recognition of systems and devices is back-ported from version 8 and updated to the level of version 9 for mkusb-nox.

mkusb-nox needs no extra packages (but makes the user experience nicer, if you let it install pv). It runs in text screens, terminal windows, via ssh and other network connections.

Use the 'grub-n-iso' method for persistence

'mk-grub-n-iso-s' was only built into 'mkusb'. This means that mkusb-nox cannot make persistent live drives, but you can use the more or less 'command line' methods described in the following tutorial at the Ubuntu Forums for that purpose, the 'grub-n-iso' method,

It can also be downloaded as a single file from http://phillw.net/isos/linux-tools/mkusb/

The Ubuntu mini.iso can install Ubuntu, Ubuntu Server, or one of the Ubuntu flavours 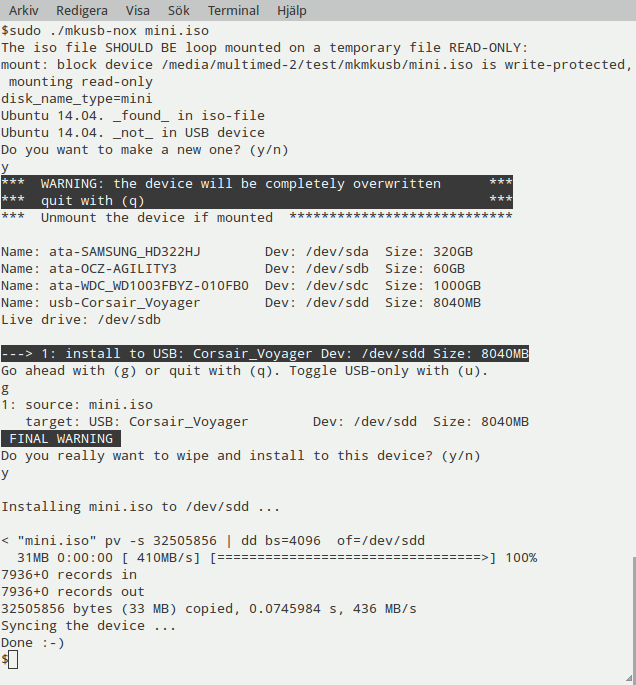 This method is tested and works with Windows versions 7, 8, 10. With 64-bit versions of Windows, the target drive will be able to boot and install in BIOS mode as well as in UEFI mode.

It was not possible to extract the content from the Windows iso file directly to a USB pendrive. The files were not copied correctly (with any of the standard copying tools: cp, rsync, dd) in Ubuntu 16.04.1 LTS (the current Ubuntu version, when this feature was added to mkusb-nox). But it works in a reliable way to extract to a tarfile, and then extract from the tarfile to the USB pendrive. 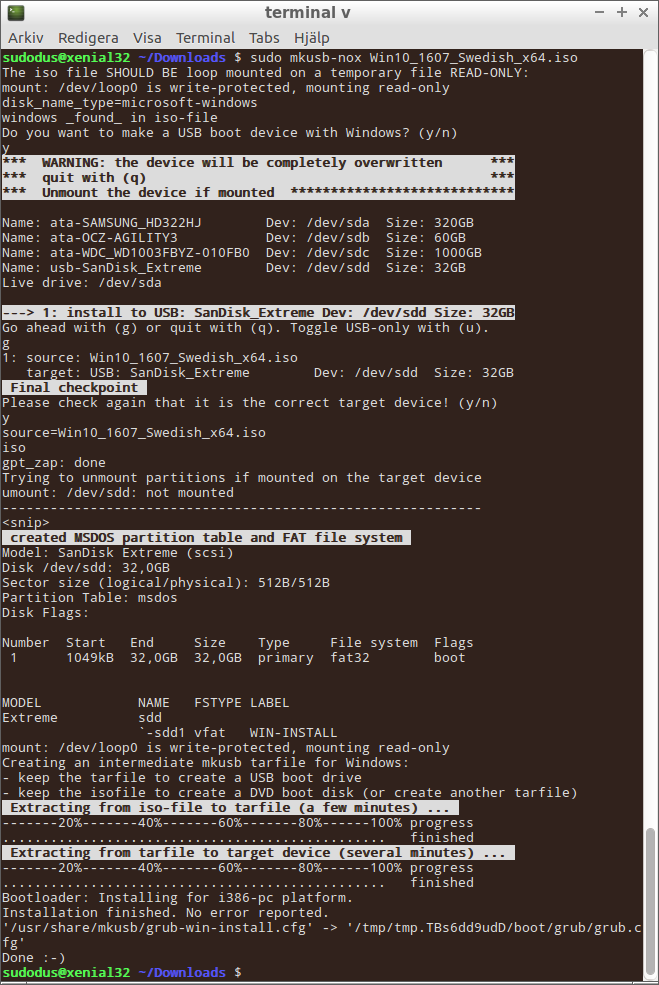 The following dialogue in a terminal window will run mkusb-nox, start by installing pv and then install two iso files into a pendrive (one after another, at the end 'ISO-testing' re-cloning with the daily build.

Running in Arch linux illustrates that mkusb-nox works in many different linux distros. You will find that mkusb-nox can use the pacman installer and suggests to install pv (if it is not installed).

There are some commands in mkusb and mkusb-nox, which are not available in old or very small linux distros, for example Wary Puppy. A simple version based on mkusb 7.4 is made for such cases - mkusb-bas.

It can be downloaded as a single file from http://phillw.net/isos/linux-tools/mkusb/

Check the md5sum with that in http://phillw.net/isos/linux-tools/mkusb/md5sum.txt.asc

and make it executable

If the main web page is not available, please try these alternate links to get mkusb-bas.

The program itself, the bash shellscript file: mkusb-bas

and the version 7.4.3 checks with the following data

If you downloaded mkusb-bas before, your internet browser may cache the old version. Please check that you get the current version.