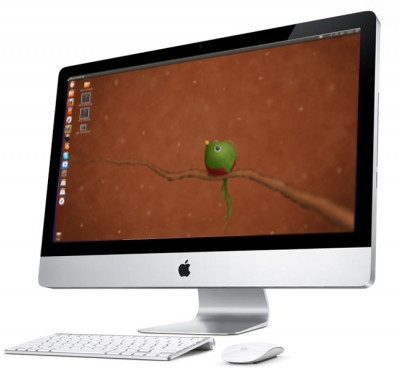 " Quantal came to imac, with a friendlier attitude "

The current known issues, which may or may not be fixed in the near(or far) future are below, please note the differences from the original 12.04 observation to the observation at its side and consider them on the instructions which comes next(avoid unneeded steps):

Cannot boot ubuntu without rEFInd or similar(probably no longer necessary on 12.10, but it still simplifies things)

Cannot properly use the mac default EFI system without running Super Grub 2 Disk once to enter the ubuntu OS you installed(must retest on 12.10).

Brigthness control not working by default, very bright screen by default: https://bugs.launchpad.net/ubuntu/+source/gnome-control-center/+bug/1020373(it does worked at some point in 12.10, must test to see how)

For Brazilian language you will need to do additional configuration. https://bugs.launchpad.net/ubuntu/+source/gnome-control-center/+bug/1012695

The Ubuntu open source driver for radeon hd 6770m is hugely slow, mainly for games and other graphic intensive tasks; no ubuntu packaged AMD driver will work out of the box due to video memory recognition issues(https://bugs.launchpad.net/ubuntu/+source/fglrx-installer/+bug/1004546).(default driver works better on 12.10, but not enough. ubuntu packaged drivers work on 12.10, but with a detail discussed later)

You will need the usb keyboard to choose ubuntu at rEFInd, otherwise you will have to pair again your keyboard as described at mac manual at OS X everytime you want to do the above. You will also need a usb mouse or wacom tablet.(Seems to still apply on 12.10 ubuntu)

IF THINGS GET NASTY(ubuntu 12.04 specific)

With 12.10, after that everything will work right away after boot.

sdXY is the / partition of your ubuntu(ex: mine was sda7), sdX is the root of the ubuntu hd(ex: sda at my last example)

From ubuntu 12.04 to 12.10, it seems grub-efi now demands an additional argument after grub-install keywords.