This guide ceased to be mantained by lunarts(me) on 15/03/13 as I cannot create guides for a hardware I no longer have. Someone must assume the role or this guide will quickly become outdated. 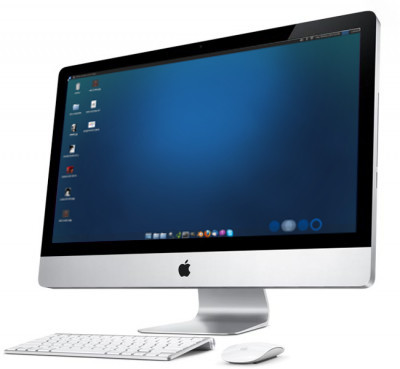 " Quantal came to imac, with a friendlier attitude "

The current known issues, which may or may not be fixed in the near(or far) future are below, please note the differences from the original 12.04 observation to the observation at its side and consider them on the instructions which comes next(avoid unneeded steps):

Cannot boot ubuntu without rEFInd or similar(only for 12.04, actually avoid rEFInd at 12.10)

Cannot properly use the mac default EFI system without running Super Grub 2 Disk once to enter the ubuntu OS you installed(must retest on 12.10).

For Brazilian language you will need to do additional configuration. https://bugs.launchpad.net/ubuntu/+source/gnome-control-center/+bug/1012695

For Xubuntu 12.10, additional configuration is needed for keyboard.

The 12.04 Ubuntu open source driver for radeon hd 6770m is hugely slow, mainly for games and other graphic intensive tasks; no ubuntu packaged AMD driver will work out of the box due to video memory recognition issues(https://bugs.launchpad.net/ubuntu/+source/fglrx-installer/+bug/1004546).(default driver works better on 12.10, but not enough. ubuntu packaged drivers work on 12.10, but with a detail discussed later)

You will need the usb keyboard to choose ubuntu at rEFInd, otherwise you will have to pair again your keyboard as described at mac manual at OS X everytime you want to do the above. You will also need a usb mouse or wacom tablet.(Seems to still apply on 12.10 ubuntu)

IF THINGS GET NASTY(ubuntu 12.04 specific)

For (L)Xubuntu, besides selecting English(Macintosh) for your keyboard, you must do:

Then add to the file and save:

Exit and reenter you session and the command keys will be mapped to ctrl, and ctrl to the command keys. That is so because for xubuntu the command keys are the 'win' keys, and you are left with only a single ctrl at a bad ergonomical position, linux uses more ctrl than 'win' keys, so we had to fix that. In case it do not work, type at the Xubuntu terminal:

With 12.10, after that everything will work right away after boot.

If plain sudo grub-install do not work, do:

sdXY is the / partition of your ubuntu(ex: mine was sda7), sdX is the root of the ubuntu hd(ex: sda at my last example)

From ubuntu 12.04 to 12.10, it seems grub-efi now demands an additional argument after grub-install keywords.

For Lubuntu that will be it, unless you need skype, in that case, for lubuntu do:

Reboot, unless you do the above skype will not have mic support, as skype depends on pulseaudio or alsa. Do after reboot:

Ensure at Settings 'Turks/Whistler HDMI Audio' is disabled; if necessary reboot (if you needed to change it).

If you have 12.10, rEFInd is not necessary, and as such, you will have no brightness problems.

- Do not install Deja Dup, use Back in Time instead.

- Energy manager will always complain your mouse and keyboard battery are empty(even fully charged), do not shut the application down, otherwise you will not have screen brightness control anymore.

- If you start Xubuntu and it has messed graphics, do not restart, shut down your computer instead and turn it on again. I once heard imacs restart is 'softer' than on windows machines, so to truly restart things if required you need to shut down. It usually seems to work for me better than restarting for Xubuntu Garbaged graphics bug.

- Go to the system configuration manager > Settings Editor > xfwm4 > easy_click . Set it from alt to none. That will avoid alt moving your window when using blender and gimp(if you use them). For Lubuntu, in terminal do:

With leafpad find locate any entry with the words 'A-Up' and 'A-Down'; change them to 'A-S-Up' and 'A-S-Down'; if by pressing alt key you mouse turns into a hand above a window, you forgot to to add 'S' somewhere.

If you find your keyboard layout being reseted after each boot on Lubuntu, go to terminal and;

Answer the questions and reboot. This is a temporary fix for an Ubinquity issue.

If you have a Wacom tablet, at (X)Lubuntu, first check what is the name of your tablet touch entry with:

Then at system configurations > session applications create an entry which calls the following command(replace "Wacom Bamboo 2FG 6x8 Finger touch" with your entry above):

Now only your pen will work, you can do different, and disable the pen if you want and keep touch on.

If you accidentlly delete your shutdown delete button(or any important menu):

You just deleted your panel settings and restarted it, since there is no custom settings anymore, it will use the system default panel.

In Lubuntu, if you want the clock to show day and month besides the hour and minute, add this to the clock settings:

If you have an ipod nano, and want to pass .ogg files with gtkpod to it, but it does not work; check gtkpod ogg plugin first, then do the below at terminal:

Install Libavcodec-extra-53(in lubuntu, other places call it extra-51) if you need to convert videos with avconv from one video/audio format to another.

You do not need a software to fully erase your dvd, just install growisofs, put your dvd in and: 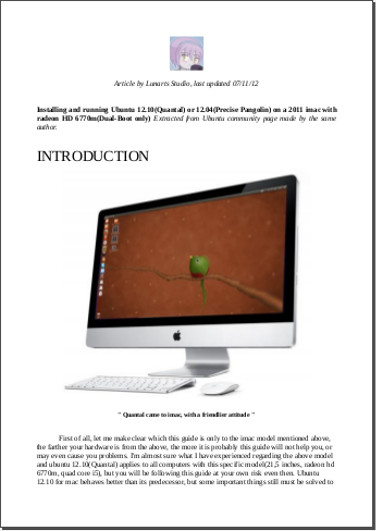 The pdf version can be found here