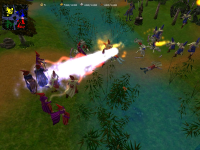 Glest is a 3D real-time strategy game released under the GPL. The current version includes single player game against AI controlled players, providing two factions for the player to control: Magic and Tech, each with their corresponding tech trees, units and buildings. Glest has been in the Ubuntu repositories since version 8.04 LTS (Hardy Heron).

Quake III Arena is the second sequel in the Quake series from ID Software. An installer for the data files has been available in the multiverse repositories since Ubuntu 8.04 LTS (Hardy Heron). A standalone server and game engine are available in Ubuntu 11.04 (Natty Narwhal) 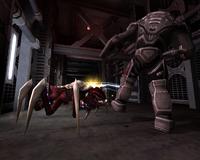 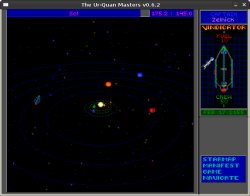 You return to Earth with a vessel built from technology discovered from an ancient race called the Precursors only to find it enslaved. Gather allies from a wide variety of races, engage in space combat with various foes, and save the galaxy from the Ur-Quan! The Ur-Quan Masters is derived from the classic game Star Control II. It includes both the adventure game described above and a fast-paced Super Melee. The game is Free and Open Source since the partially-ported source code for the 3DO games console was released by its owners, Toys for Bob.