K3b is a CD and DVD writing ('burning') application which provides a comfortable user interface to perform most CD/DVD burning tasks. Beginners may find comfort in the automatic settings and the reasonable K3b defaults which allow a quick start to be made. 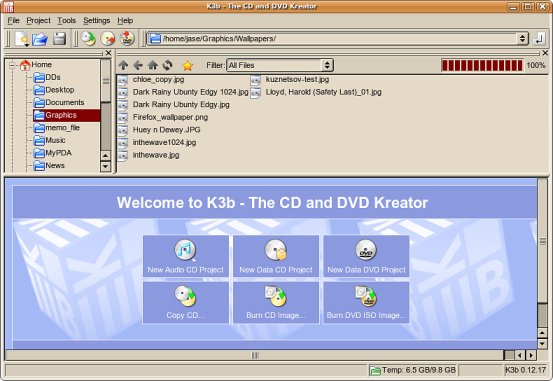 k3b is a front end for several applications that rip disks and write them. The following applies to music CDs on the compiled version of k3b:

Wodim is a disk writer. If you encounter the error "K3b error: Cdrecord has no permission to open the device" and your burn fails, it may mean that your disk is bad, or k3b has experienced some other kind of error. Throw the disk away (it is now unusable), close k3b, reopen it again, and try again. (Incidentally, k3b used to use cdrecord but now uses wodim; the error message is out-of-date.) You do NOT need to run k3b as root to have permission, as is suggested in several places if you research this error. (Running k3b as root for a "fix" requires you to throw the disk away, close k3 and start it again, and try another disk.)

cd-paranoia is a disk ripper. k3b's implementation of cd-paranoia sometimes "gets stuck" on difficult CDs. If k3b shows no progress after a considerable period of time, consider quitting k3b and using cd-paranoia from the command line. Then use the k3b interface to add tags to the resulting .wav files.

When you have music files from different sources, you must use normalize to bring them all to the same volume level, or when you play the CD, you will have to adjust the volume for each track. However, k3b will not recognize the application "normalize-audio" because it checks the version, and the version is wrong.

To fix this, you must install a wrapper that returns the correct version to k3b. Create a file called "normalize-audio" which will be this script:

Make the script executable and place it in /usr/sbin/normalize-audio. Then point k3b at it instead of /usr/bin/normalize-audio (Settings --> Configure k3b...--> Programs) and your normalize will work properly. (Unfortunately, the discoverer of this trick is unknown; he should receive credit. Documented here: https://bugs.launchpad.net/ubuntu/+source/normalize-audio/+bug/1041819 -- see that page to format the lines of the script correctly.)