As with all wiki documentation, this page continues to be updated.

Slightly adventurous Intel-based Mac ("Mactel") owners seem to often be afraid or confused about installing Ubuntu alongside OS X, but it is not very difficult. There are some oddities (see NOTE) that make installation on Mactel different from installation on a PC (but if it were the same, it wouldn't be a Mac, now would it?). Guidelines for different configurations are detailed here.

If your computer does not have a CD-ROM drive, such as the MacBook Air, this document may not have enough information. See the "Install Ubuntu on MacBook from USB" guide.

In Ubuntu do not try COMPIZ, this will completely mess around Unity and make it necessary to reinstall Ubuntu. Be aware that it keeps being tricky running Linux on a Macintosh

This guide does not mention how to use e.g. diskutility to resize an encrypted mac partition.

You may laugh now, but when you make a mistake and wipe out your disk, you will be sorry! Time Machine comes with Leopard, and it is so easy to use that it isn’t funny, so most people have no excuse for not backing up their data. Better even, a backup to another system, external disk or cloud (e.g., Mozy) are not subject to partition configuration errors. When Bootcamp fails or you have strange faults maybe you want to clean up your harddrive. When erasing the hard drive choose "Security Options ..." - "Zero Out Data".

Many users would like to make Ubuntu their only operating system. If this is what you plan to do, there are some changes that you can make to your system that will make its operation closer to that of a PC, avoiding some of the special partition considerations detailed in the other installation situations below.

Intel Macs have an EFI instead of a BIOS as in an 'IBM compatible' system. A different partition table scheme, GPT, is used on the hard drive.

The EFI is capable of using MBR partition table format. Since the recommended Ubuntu installation methods use the "legacy mode" of the EFI, it make sense for a single-booter to convert their hard drive to the MBR format.

I recommend staying with GPT. Perhaps the author of this recommendation could contact me (cjwatson AT ubuntu.com) to discuss it. --ColinWatson qqq I didn't want to loose this in case Colin wants it back in DGerman qqq

You can convert your hard drive partition format with gparted on the Ubuntu LiveCD.

Assuming that the bootloader is on sda1, otherwise /dev/disk0s2 if it's on sda2, etc.

INSTALL rEFIt! You don’t HAVE to use it once you get Ubuntu up and running, but until then, INSTALL rEFIt! You will need it after installing to sync partitions, once you have done that and Ubuntu works, then you can uninstall it. You can even burn a rEFIt CD if you prefer. If you do not see the rEFIt boot menu when starting your Mac on the second reboot (It takes two reboots to apear after using the package installer), it is not installed properly!

The first thing we need to do is repartition your Mac’s hard drive. Of course, we would like to do this non-destructively (without wiping out the partition you have already). With Leopard, this is quite easy as Apple has provided a nifty little tool that will shrink your OSX partition and create a Windows partition in the freed space (which we can convert to Linux partitions later). BootCamp is probably the easiest way to accomplish what you need.

Leopard’s DiskUtility can also shrink the OS X partition and add partitions in a single step. It cannot create Linux format partitions though, so if you choose this route, you should create “free space” or an “msdos” format partition, which can be modified later.

At this point, we are really just allocating the space you want for Ubuntu. The actual Linux partitions will be created later during the installation.

For pre-Leopard OS X, there are no such tools. BootCamp does not run, and DiskUtility will only allow you to create more partitions if you wipe out all the current partitions. However, the underlying commandline utility still exists.

Here's a usage example. Let’s say you want to resize your OS X partition to 200GB and leave the rest of the disk free (for Ubuntu of course). You would open a terminal and type the following, followed by the "Return" key.

You can read more on diskutil by typing 'diskutil help' in your OS X terminal.

You can download the Ubuntu Desktop Edition ISO from ubuntu.com. (You can choose 32-bit or 64-bit, the choice is yours. If you want to see the pros and cons, you can check out the sticky.)

An ISO is an “image” of a CD-ROM. You do not burn an ISO onto a CD like you do with pictures or music. Instead, you burn the image onto a disc. It's kind of like mixing Cool-Aid. You don't just drop the packet (ISO) into the water (disc), you must open the packet and dump the contents into the water.

ISO images can be burned with Apple's Disk Utility or other burning apps. You should burn the CD as slow as you can to increase its “bootableness”.

Boot your Mac from the CD

Put the Ubuntu LiveCD in your Mac and reboot.

When the rEFIt menu comes up You should get the option to boot from the Ubuntu CD. If you do not see this option, try pressing the Option key when your computer starts. On a Mac, the "c" key will instruct the Mac to attempt booting off of a CD/DVD.

On the Ubuntu CD’s boot menu, select your keyboard language, then choose to "Try Ubuntu". This will start a LiveCD Ubuntu session, which makes no changes to your Mac.

Once booted, you have a Ubuntu desktop. Start gparted (partitioning tool) by navigating to System > Adminstration > Partition Editor.

If you previously created an “msdos” style partition used Boot Camp, you should use gparted to delete this partition. It will be located after an EFI partition (hidden in OSX) and an HFS+ partition (HFS+ is OS X's filesystem). Deleting the new partition leaves “free space” on the disk for the Ubuntu install. Use gparted to manually partition the space on your drive for Ubuntu. First create a SWAP area of about 1GB. Then the rest of the unallocated area format as EXT4. Apply changes and take note the label of the EXT4 partition such as /dev/sda3.

Back on the Ubuntu LiveCD desktop, start the Ubuntu Installer from the desktop icon. When prompted, choose to manually partition. Select the EXT4 partition and click change. Select to use the space as the EXT4 filesystem and root (/) as the mount point. You will also want to check the box to format the partition. On the last dialog of the installer, be sure to click the “Advanced” button and choose to install the boot loader (grub) to your root Ubuntu partition, for example /dev/sda3. This will be the only partition with the EXT4 file system.

When the installer is finished, reboot. 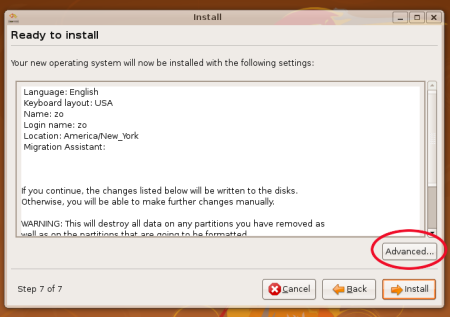 There is a bug in the installer that causes a problem on Macs. FIXME: Describe problem? It can be fixed with rEFIt.

Reboot to the rEFIt menu and select the “partition tool”. rEFIt will ask if you would like to sync your partition tables. Say Yes and let it do it’s magic. (If you don't have an English keyboard, note that the keys "Z" and "Y" are swapped in the partition tool.) If you see the error "GPT partition of type 'Unknown' found, will not touch this disk" instead of the 'yes' prompt, follow the instructions in comment #6 of this thread and make sure to install gptsync_0.13-10 or higher.

After it is done, SHUTDOWN your Mac (not reboot) and startup again. You should now be able to boot into Ubuntu. If you select the Linux Icon in rEFIt, and it freezes on the grey Tux logo, shutdown again and try one more time.

Most Intel macs will use the Mac OS X default GPT partitioning scheme. The MBR/PC-BIOS compatibility of Intel Macs is limited and cannot provide all the disk/BIOS management features found in a PC. This is the reason why some extra attention is needed for partitioning layouts in Intel Macs to get what you want. (The alternative msdos/MBR partitioning avoids many of these limitations, but Mac OSX support and utilities are lost, which is why it was recommended only for the single-boot section.)

If Windows is installed, rules apply to choice of partition, and this depends on Windows version (Vista or XP). Some methods used for Vista will not work for XP.

It is not intended to detail all the possible combinations here, but some general rules and examples of multi-booting partition arrangements and tools required are shown to help you choose. Some of these require extra enthusiasm, and the more complex, the more need for backup.

*Note, because this is likely the most popular scenario after dual-booting, it should be the first in the "multi-booting" section and deserves a full write up.

For a complete new installation with partitioning requirements known, it can be easier to set out the partitions initiallly using the Mac OSX installer DVD Disk Utility GUI, then using ubuntu gparted to finish off. This screen shot shows an example (OSX 10.4), the OSX partition is p2, initially unjournalled to allow write access for ubuntu. The external drive was partitioned the same way. (This method requires careful choice of partition formats if MS Windows is involved). 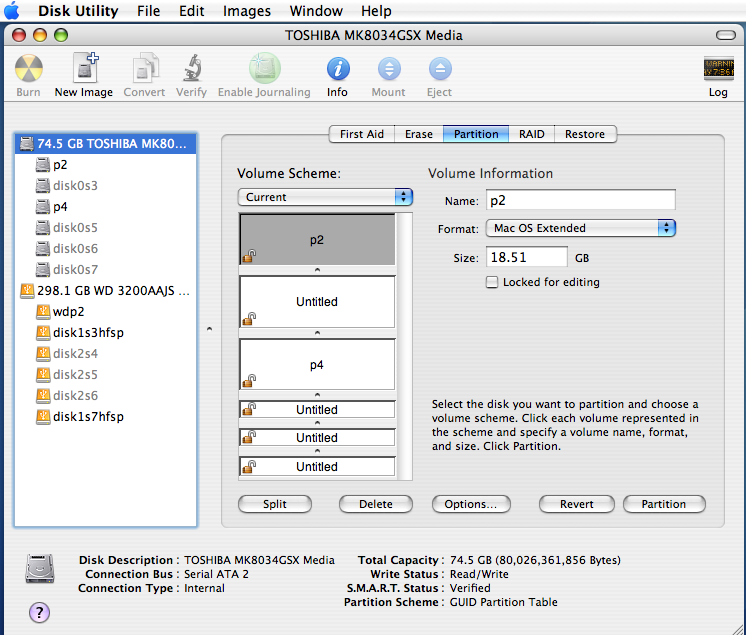 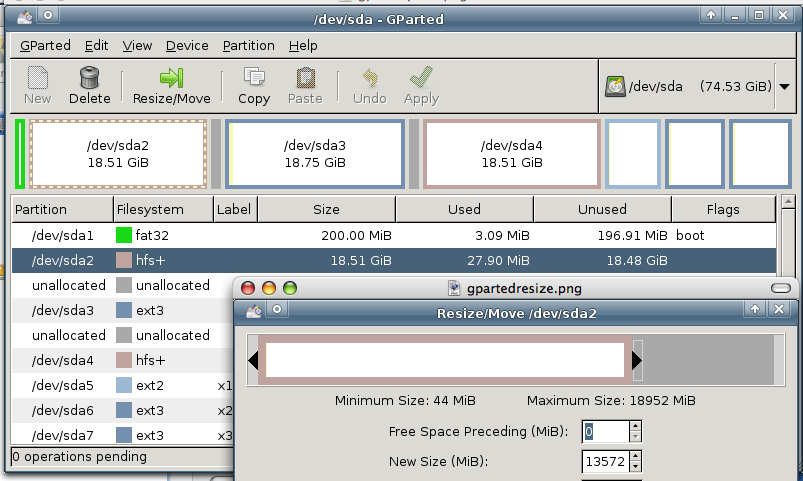 This method won't work for XP because XP wants to be on the last MBR partition.

(Do not use the above method to install with XP, it will fail)

To share your home directory between OSX and ubuntu you need to use hfsplus with journaling turned off. R/W of hfsplus is experimental on ubuntu as far as I know and ymmv I have been succesfully doing this on my G4 and now on an intel macbook pro, with some problems but no data loss so far.

Installing ubuntu using wubi in vista and other complex systems

The basic single and dual system partitioning, tools, and installation method have been described above for a single, internal hard disk. Macs with multiple disks have the additional simple option of separate disk for each OS (with some traps such as refit being limited to gptsync the first disk). Some information on this can be found on the Mac Pro page

Some Intel macs can use the EFI version of the grub bootloader (AKA GRUB2 or grub-efi) which enables external booting similar to the Mac OSX EFI bootloader.

You have already installed Mac OSX and Windows Vista, now to install Ubuntu.