The OBI project is no longer relevant because the computers and the internet have changed, so that computers with so little RAM, that the OBI is needed, are no longer useful (except as 'typewriters').

Typical cases for the One Button Installer, 'OBI'

Tool that is easy to use and just works

The normal linux installers that come with iso files are complicated to use or freeze during the installation process, and you want a tool that is easier to use and just works.

Replace Windows XP because after the end of life in April 2014, when there will be no more security updates for Windows XP.

You want a simple method to backup (and restore) your whole installed linux system. The One Button Installer combines installation, backup and restore in one set of tools.

Your own portable Ubuntu based linux system

You want to make your own linux system portable and port it to a USB pendrive or to be installed in another computer to be used by yourself, or to be uploaded to the internet for sharing with other people. The One Button Installer can do it in a simpler way than to remaster the code and make an own iso file.

How to install and run the OBI

Please view or download this OBI quick start manual file with a short description how to make a boot drive with the OBI and how to use the OBI to install an Ubuntu based linux operating system.

Use mkusb in linux to install the One Button Installer from its compressed image file. You find mkusb here:

In Windows there is a two step procedure as described in the OBI quick start manual. Start by decompressing the compressed image file with 7-zip. Continue with Win32 Disk Imager.

If you want to read more, please view or download this README file, which describes with more details how to make a boot drive with the OBI and how to use the OBI to install an Ubuntu based linux operating system to your computer, to make a portable system or to make a tarball from an existing system for backup or sharing.

A new compressed image and new tarballs uploaded at http://phillw.net/isos/linux-tools/one-button-installer/

You can download torrent files in order to get the One Button Installer and a tarball with a small Xenial 32-bit system.

Select one of the compressed image files alias dd_images

and at least one of the tarballs (check for new tarballs at the websites for downloading). User: guru, Password: changeme if nothing else is stated, except for the One Button Installer itself, that comes with User: myself, Password: 123456

plus a script file and a signed list of the md5sums.

Get the files from http://phillw.net/isos/linux-tools/one-button-installer where a complete set of files is available or from this google drive address where a limited selection of files is available. If one website is slow or unreliable when you want to download, use the other one, or use the torrent method!

Test the One Button Installer in a virtual machine

Download a virtual disk for testing the OBI in Virtual Box

Virtual Box can connect to peripheral devices and mass storage devices via USB, but not boot. Instead, the OBI can be installed to a [virtual] hard disk drive. The virtual machine will boot from the first virtual disk, so you must put it on top in the 'storage managing window' or use F12 at boot to select the correct virtual disk. Later, when you want to boot from the installed system, you must switch the order of the virtual disks. There are two compressed virtual disks with the OBI in

Expand it (from vdi.xz to vdi) with file-roller or this command line

The standard tarballs can be downloaded via Download tarball in the main menu and used in order to install systems to a second virtual disk.

If a 64-bit host operating system in a machine with hardware virtualization is available, install a KVM virtual machine. Otherwise Virtualbox might be more efficient.

Install a virtual machine using KVM, qemu, and virt-manager according to this wiki page

It is fast and very similar to installing and running in a real system.

You don't need a special virtual disk file for KVM. You can mount the OBI image file (after expansion from img.xz to img) and it can be used as a virtual SATA disk. If it is the first disk, the virtual machine will boot from it. You can also press F12 at boot and select boot drive.

The standard tarballs can be downloaded via Download tarball in the main menu and used in order to install systems to a second virtual disk.

Make your own tarball

1. The dialogue has been improved by using screens made with the linux program dialog. It means a menu style similar to that of the alternate installer and the mini.iso. See the attached pictures.

2. The compression of the dd-image files and the tarballs is improved. The original compression was using gzip. It is still available, but now xz compression is also available, and xz compression is more than 20% more efficient, often 30% (meaning that the size of the compressed file is 20-30% smaller than a gzipped file). xz is slower and needs more memory, but not too much. During a test with low RAM, 128 MB, extracting the tarball with xz used 62 MB while extracting with gzip used 49 GB. Downloading is usually the bottleneck, so small files are preferred.

The default compression for making an own tarball is using gzip. In the present version 1.0, you must run mktbl from the bash shell to create an xz tarball.

1. Own directory for tarballs (plus symlink)

Put and find the tarballs in

2. There is a new download system with a dialog menu, that you run from the main menu with

3. From version 1.1 xz is the default compression in mktbl. You can also enter a tarball name as parameter #3 when you run mktbl from the bash shell.

The advanced level opens the door to dual boot (mainly for internal disks) and a first FAT32 partition for access from Windows (for USB pendrives). In the advanced level the OBI will let you select the partitions. It means that you can install a system from a tarball into two partitions, one root file system partition and one swap partition. This way it is possible to create a dual boot device with an existing (already installed) operating system. It is also possible to create a separate data partition with an NTFS or FAT32 file system, that can be used by linux as well as Windows.

Editing partitions is risky (so you need a good backup) and it takes long time (hours) to shrink an existing partition with a lot of data (Windows), so that there will be space for new partitions. 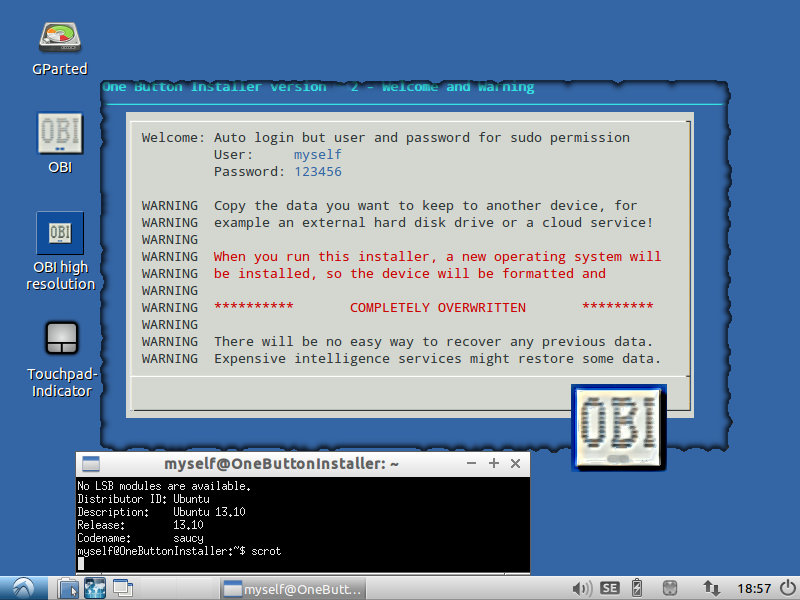 In order to make it more convenient to use the advanced OBI level (introduced in version 1.2), there is now version 2.2.

A. Version 2.0: The underlying operating system is upgraded to Ubuntu version 13.10

B. Version 2.1: Lubuntu-desktop is installed and tweaked to create a graphical desktop environment with desktop icons for the main tasks during installation with the One Button Installer. See the attached picture file, #37!

0. Toggle the touchpad (to prevent accidents with laptops and notebooks because the palm is touching the touchpad and causing unwanted commands).

1. Run Gparted to edit the partitions (preparing for the advanced OBI level).

2. Run the OBI in a normal lxterminal window

3. Run the OBI in a maximized xterm window with high resolution, in other words with more lines and columns

C. Version 2.2 is released. It has the same features as 2.1 plus a few bug-fixes. The pdf documents of the version 1.2 are also updated for the usage of version 2.2.

A USB 3 pendrive with at least 8 GB is recommended for the graphical desktop environment. But there is also a flavour of version 2.2 with a text desktop environment, which is suitable for very old computers. A 4 GB pendrive is big enough for the text version.

This version is mainly a bug-fix update from 2.2 including updated pdf documents. The operating system (13.10) is also updated/upgraded.

New feature: the OBI will share an existing swap partition, when selected at the advanced OBI level. 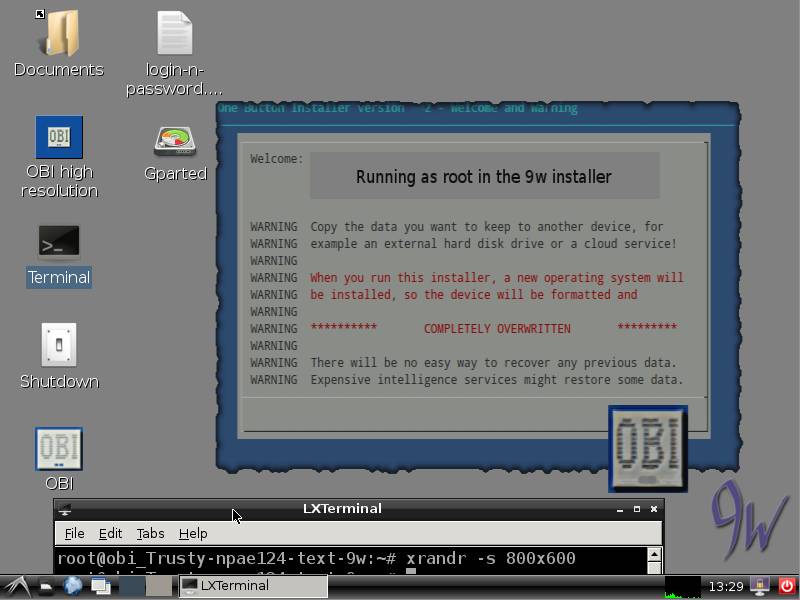 There is a new and special version of the 9w installer, https://help.ubuntu.com/community/9w#A9w_iso_files

This version is made for very old computers without PAE capability. The One Button Installer in run from the 9w installer's debian system. Now there is a super light-weight installer, that can

Prepare partitions with Gparted and run the One Button Installer at the advanced level to create dual boot or multi boot system.

There are special tarballs for the 9w installer, and these tarballs come with the iso file.

This version is a bug-fix update from 2.3 and 2.4 including updated pdf documents. The operating system (14.04 LTS) is also updated/upgraded.

New feature: the starter menu will set the default item (command line) in a logical way prompting to download and select tarball, select OBI level and then install a system. Two-digit partition numbers (/dev/sda10 ...) are recognized at the advanced OBI level.

This version is a major improvement, implemented for ToriOS but not published here. 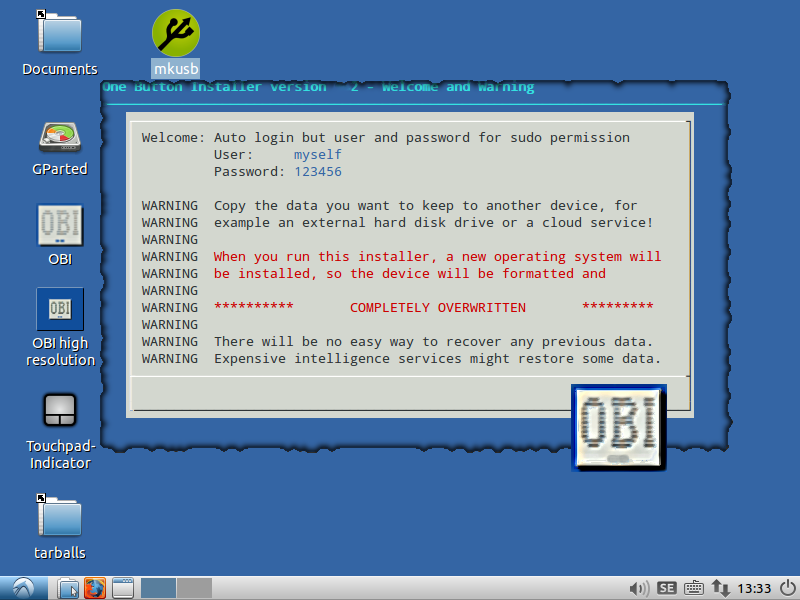 This version is a bug-fix and polishing update of the starter script. Current mkusb and mkusb-nox are installed and there are updated pdf documents. The operating system (14.04.1 LTS) is also updated/upgraded to the current date (2014-12-28).

This version number is reserved for ToriOS.

View the pictures as a slide-show

The pictures are screen-dumps and illustrate how to use the OBI. View them with 100% resolution here!

Finally a reminder of the OBI quick start manual file ...

OBI is now available as a Debian package for use in custom ISO making scripts. This is the main forcus of development for projects like Tori OS OBI