If you encounter an error related to PAE while installing Lubuntu 18.04 LTS, the solution is as follows:

Boot the computer with a 32-bit Lubuntu DVD in the DVD drive. When the image of a keyboard and a little man in a circle appears, hit the tab key.

At the boot menu screen the options are:

With the cursor on the top choice press F6 (If you use the minimal ISO then press Tab in stead of F6).

A menu with a number of options appear. The option 'forcepae' is not there, so press Escape to close the list.

Now a string of options is visible, often with 'quiet' or 'quiet splash --' at the end. Add 'forcepae' to the string before and after the two or three dashes ("forcepae -- forcepae").

Press return, and after a moment the installation begins. A possible warning about forcepae being experimental does not matter for Pentium M or Celeron M processors. 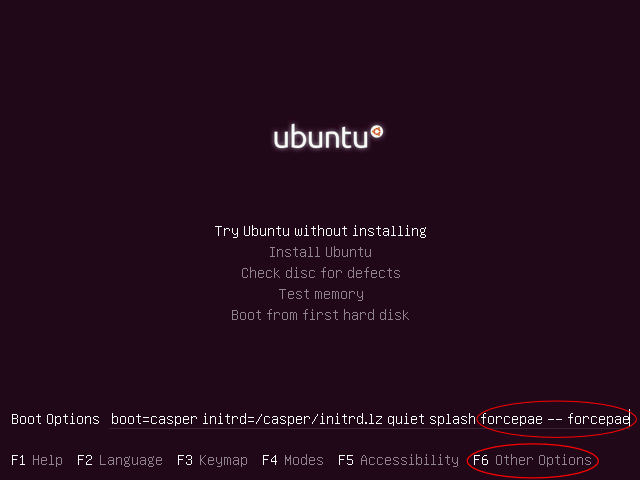 If everything appears to work you don't have to read further.

The "forcepae" option must be entered twice, before and after the delimiter "-- ", so that it is applied to both the kernel on the ISO and the kernel on the system after installation. This is a change from older installs where only one parameter was sufficient. This link describes use of the "--" in boot options.

Technical note: After booting, "dmesg | grep -i pae" will now show "PAE forced!". You can use this as a check.

If you are going to upgrade (as opposed to install) there is advice here.

Physical Address Extension (PAE) is a feature found on almost all 32 bit processors produced after Pentium Pro, ie. younger than around 1995. Because PAE is close to being a standard it is now a requirement for Ubuntu: During installation the processor is prompted for the PAE flag, and only if present the process will carry on.

Lubuntu and Xubuntu offered a PAE and a non-PAE release up to and including 12.04, but from 12.10 only the PAE releases are maintained.

A number of older Pentium M processors produced around 2003-4 (the Banias family) do not display the PAE flag, and hence a normal installation fails. However, these processors are in fact able to run the latest (and PAE-demanding) kernels if only the installation process is modified a little. The problem is not missing PAE, it's about the processor not displaying its full capabilities.

Pentium M's of the Dothan family display the PAE flag correctly and support the latest Buntus without modifications. The same distinction (Banias versus Dothan) goes for the lower performing Celeron M processors.

In spite of their age many of the affected computers (IBM Thinkpads and Dell Latitudes, for example) are suitable for today's use if given a light distro like Xubuntu or Lubuntu; among other advantages they have a low power consumption. This guide describes a workaround for installing the latest Lubuntu and bringing them back to life - actually the guide can be modified to work for any member of the Ubuntu family, but because we are dealing with old hardware we focus on Lubuntu.

General note: If the installation is failing, are you sure the problem is related to PAE? A lot of misunderstandings flourish, and lack of PAE support is too often blamed when an installation on old hardware fails. Only if you get the error kernel requires features not present on the CPU: PAE or similar this guide comes into play.

Now we know that the problem is in fact related to the PAE flag. This gives several options:

A. Install 18.04 LTS as described at the top of the page. For most users this is the easiest and best solution.

B. If for some reason the computer does not run 18.04 LTS a number of distros are available. for example Bodhi Linux but check that you select a version with a reasonable time left until end of life.

C. Move the hard disk to a computer on which the processor has PAE capability and PAE flag (that is, almost everything else than a Banias). Install the system as usual but don't add restricted drivers. After the install move the disk back.

E: Installing without the forcepae option.