This guide will help users who are having issues with a lack of free disk space. The user may have received an error message such as "There is not enough room on the disk to save ..." or perhaps a message about "insufficient disk space". This page presents ways to discover what is using large portions of your disk space and how to regain some free space.

The primary focus is on restoring space on the system partition ( / ) but the procedures can easily be modified for other partitions as well.

Tips Before You Start 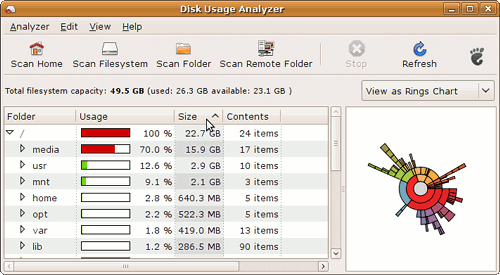 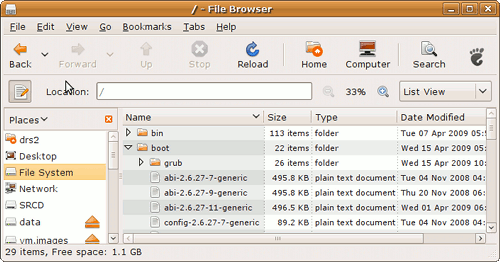 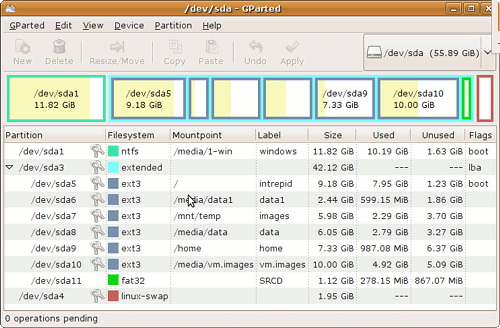 Checking Your Partitions via Command Line

Access the terminal via Applications > Accessories > Terminal or use CTRL-ALT-T, or use ALT-F2 and then enter the command in the top input area.

A brief note on df and du: It is beyond the scope of this guide to go into detail about how df and du report disk usage. They look at disk space differently and the results will not be the same. Generally the results of df will show more disk usage than those of du since it considers block size rather than just the specific file size. Additionally, df's results will include information about open files - those which are not currently written to disk but do exist in memory.

Terminal command results may include /proc/ entries. These are virtual file entries, are not the cause of lost disk space, and should be disregarded.

Since the df command provides details on mounted partitions you should run the df command after you have decided which devices you wish to investigate and have run the appropriate mount/umount command. By closing all applications and running sudo umount -a first, df commands are more likely to report only system partition information.

This command will show you how much space is being used by the mounted file systems on a given folder. If a device is mounted to a folder which already contains data, the underlying data size will not be included in the results. This means that if /media/data contains 40 GB of data, but a 20 GB partition is then mounted to /media/data, the results will show only the 20 GB of the last-mounted device (because the 40 GB are now inaccessible).

Find a file or folder

Partition Is Too Small

Backup any important files before performing any partitioning operations. If the operations involve NTFS partitions, defragment them at least once as well.

Some users created very small /boot partitions. If older kernels are not removed the partition may become full and this or a similar message may result: gzip: stdout: No space left on device update-initramfs: failed for /boot/initrd.img If the user has a separate /boot partition and/or received the previous warning, check the available space and the kernel in use:

On of the most common causes of disappearing disk space is a back up saved to the wrong location. Improperly designating the back up location is a frequent cause. It can also be the result of a file saved to a mount point on which no device, such as a back up drive, is mounted.

For problems with your system partition, unmount all but your system folders using the sudo umount -a command discussed earlier.

When a file or folder is deleted via a file browser in most cases it is not removed from the system. Instead it is placed in Trash. Until Trash is emptied, these files are recoverable and continue to take up space on the partition. There are several places on the system that deleted files are stored. It varies by which version of Ubuntu is running, the origin of the deleted folders/files, and who deleted them.

Example: A user downloads a collection of large .iso files or installation packages. Deciding not to use the files, the user deletes them using administrative privileges (as root). The user's Trash shows empty, the user can't find the files with his/her browser, but the free space isn't restored. In a different scenario, another user on the same machine deletes files but never empties Trash.

A single 'rogue' file may be consuming large amounts of space. Use the following command to locate abnormally large files.

As mentioned earlier the user can use the find command to search for large files.

Decide what the files are, if they are in the proper location, and whether or not you wish to retain them. If you delete a large file, either bypass the Trash bin with the rm command, SHIFT-DEL in nautilus, or empty the appropriate Trash bin after deleting it.

Too Many Collected Packages

Packages (.deb files) downloaded for installation by a user via the system (apt, synaptic, dpkg) are stored in /var/cache/apt/archives. Over time, this folder can become quite large. Under normal circumstances it is not necessary to keep packages locally; they can be retrieved from a server if re-installation is desired.

How to Find It: To check the amount of space being used for package storage, run:

There are several system commands you can use to reduce or eliminate the number of locally stored packages.

Log files are usually stored in /var/log and its subfolders. An excessive number of small log files or large individual logs can eat up disk space.

You can run the following to see the size of each /var/log/ subfolder:

When partitions are cloned to a partition of a different size (such as restoring a Partimage file to a larger partition), the partition table may need to be updated. How to Find It:

The size of a partition after cloning may reflect the original cloned partition size rather than the size of the partition into which it was restored. This is discussed in the Partimage user's manual. gparted may show the entire partition as used even when you know it isn't. How to Fix It:

Note: The following procedure is for ext2 and ext3 formatted partitions only. Change sd'''XX''' to the correct device designation (example: sd'''b3''')

NTFS Partition Is Not Correctly Sized

No matter what the cause, it is possible an NTFS partition table fails to indicate the correct size of the partition.

The size of a partition isn't what it should be. You can check the disk size by running df -Th -BGB /dev/sdXX. The command will indicate the file type (NTFS), size in GB (in GiB if -BGB is omitted or if -BG is used), used/remaining space and percentage free.

Note: You will be warned in the final stages of the operation to backup data and ensure a reliable power source. The warning may appear a bit intimidating but merely reflects precautions which should be taken any time a partition table is altered.

Each ext2/3/4 partition will contain a lost+found folder. This folder contains corrupted files discovered by the system during an fsck check.

You can run the following to locate each lost+found folder and, optionally, see the size of each folder:

If you delete it, you must use SHIFT-DEL in a file browser, the rm command via terminal, or empty your Trash (or root's for root-owned folders) before the space is actually recovered and made available for use. Simply highlighting the item and hitting the DELETE key will move it to Trash, where it will continue to take up space. Warning: These delete methods cannot be reversed! Make sure you are deleting the correct item.

Gain Just a Bit of Space

You can gain a bit of space by following these steps. Don't expect large free space gains.

Install Apps When the Disk is Full

Well, almost full. Use this technique when you don't have the space to download apps and then install them from cache.