SCIM can be used in Kubuntu, though via another helper application aptly named SKIM. It's fairly easy to install, and the majority of the steps needed is identical to the ones needed to install SCIM.

Other wiki entries on this subject suggest adding the Japanese Ubuntu repository. While not needed, it does contain updated versions of the packages you need installed as well as some outright missing from the normal repositories.

Enter the following in a terminal to download and install all needed packages.

Per default, KDE won't use SCIM as the default IM, so SKIM won't work. Enter the following in a terminal.

This will set the IM to be used for the current locale to SKIM. In some cases, it won't be a true locale, but rather a catch-all all_ALL (as compared to en_US, en_GB, sv_SE, etc). If you want to make sure you have it set for a specific locale, call the same command but with an added argument; -z lang_LANG . Example follows.

If it returns an error message saying that input method cannot be chosen for that locale, enter the following and then retry the above command afterwards. Replace lang_LANG with the locale in question.

An icon should pop up in your system tray. Right-click it, and hit Configure.

In the Frontend / General SCIM section, go to the Other tab and select Panel Program: scim-panel-kde, as well as Config Module: kconfig. Likewise, in the X Window section, check Start skim automatically when KDE starts.

The "skim" we've so far been referring to is actually a file named skim, located in /etc/X11/xinit/xinput.d. Per default it is incomplete, missing entries to make programs that rely on XIM for input work with SCIM.

Open it up in a text editor with superuser persmissions, such as by running the following in a terminal or a run box (Alt+F2).

Paste the following contents into the file and save it.

At this point you need to restart X, such as by rebooting, or logging out and hitting Ctrl+Alt+Backspace.

The following guide is for people who want to install SKIM for Chinese/Japanese/Korean input on Kubuntu.

For users wanting to set up Chinese/Japanese/Korean on Ubuntu using SCIM, click HERE

The guide below was created with a view to enabling Chinese input.

Substitute any selection for the Chinese language for a language of your choice to enable input for said language. Provided it's supported by SCIM of course.

Installation and Setup for 6.06

If you encountered any problems during the installation, check the Problems Section for possible solutions.

You have to tell the system you want to use SCIM as the input method for your locale.

You do not have know the locale to use SCIM - there is "catch-all" called all_ALL that covers all locales for this purpose (see man im-switch for more information). Also, you should use scim-bridge instead of scim. Hence:

Some of the Chinese characters that I'm entering show up as big black dots! 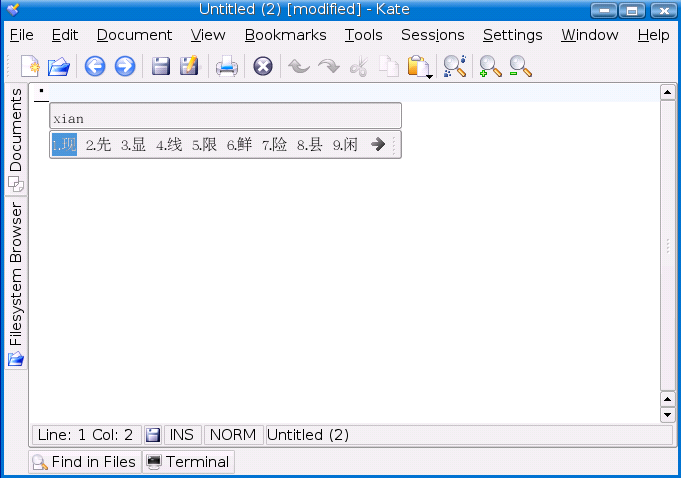 Switch to something like 'AR PL ShanHeiSun Uni' which by default comes with Kubuntu (to do this go: Settings Menu -> Configure Kate -> Fonts & Colors -> Fonts tab).

However, different applications have different ways of setting the fonts, so don't hesitate to do some exploring if you encounter this problem in a new application.

error everytime KDE starts up (where <username> is the name you login with). NB: There aren't actually any spaces between the underscores.

See if the problem is fixed by reboots, if not you can try delaying the sequence that im-switch loads in: