Software From Other Operating Systems

Consider if you really need to run that software: in most cases, its functionality is provided by a free Linux program, see SoftwareEquivalents. 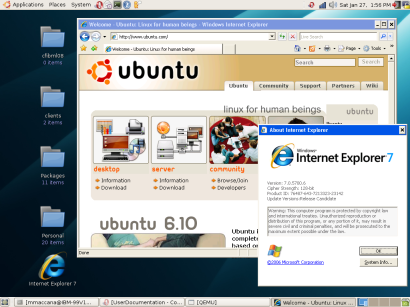 You can run applications created for other Operating Systems inside Ubuntu using two different approaches:

Virtual machines have the advantage of providing full compatibility, however Wine offers more performance and the ability to render 3D graphics. Crossover is a commercial version of Wine, and is available within Software Center.

3D games will generally not work in virtual machines, however many work in Wine or Crossover Games.

Some Windows games have a Linux installer included on the installation CD, such as Unreal Tournament 2003 and 2004. These games do not need Wine.

You can often save yourself a lot of time and trouble by checking if an application is known to not work in Wine by using the Wine Application Database.

Available Methods to Run Software from Other Operating Systems

If you have your computer set up to run two operating systems (you can find more information about this at DualBoot/Windows), you can set up an icon that will switch you into Windows from Ubuntu by following these instructions:

First, we must edit the GRUB menu and see what menu number the entry for Windows is. Run:  gksudo gedit /boot/grub/menu.lst  Warning: Be careful editing this file, making a mistake will potentially make your system un-bootable until you fix it with a LiveCD

Look at this file, after the comments, you should see a line that says ## ## End Default Options ##. The actual menu items are located after this line. Count them, and make a note of where the Windows entry appears. Keep in mind that GRUB starts counting from 0, so don't start at 1. In my case, the entry for Windows is number 5. Note: Be sure to count every entry that has a "title" line, including the one that says Other operating systems: if you have it.

Before we are done with the menu, we must change the default settings and change the Windows entry so that it automatically resets the default to Ubuntu. This will allow us to simply reset the computer from Windows and have Ubuntu load as it normally would.

To do this, look for the line that starts with default, near the beginning of the file. Change it so that it says

Warning: RAID users should heed the warning in this file

Next, we must change the line savedefault under the Windows entry to savedefault 0, where 0 is the number of the Ubuntu entry. Your number may be different, but likely not. Save the file, close gedit, and move on to the next step.

Now, we need to create a script that will set the default operating system to Windows, and then reset the computer. First, we need to allow normal users to run the grub-set-default and reboot commands, which normally requires sudo. To do this, run  sudo visudo  Add the following lines to the bottom of the file -

Warning: If visudo complains about syntax errors when you exit the program, do not ignore them! Go back and look at the file and see what went wrong. If you mess up the sudoers file you might not be able to run sudo at all, which you'll need a LiveCD to fix.

WARNING: This will allow any user on your computer to reboot the computer. Normally, any user can use the menus to do this, but if you allow users to remotely connect to your computer you may want to consider the idea that any of them could reset your computer at any time, so this might not be something you want to do.

Now, run gedit reset-to-windows.sh, and put the following lines into it, replacing 5 with the number of the Windows entry in the GRUB menu:

Save this file, and make it executable and system-wide by doing the following:

Great! Only one last step: right click on the desktop and select Create Launcher. Name this launcher Switch to Windows, and set the command to /usr/bin/reset-to-windows.sh. Select an icon if you'd like.

Now, you can use this icon to reset the computer, and it will come back up in the Windows operating system. Later, if I can get my hibernate to work, I will show you how to use this technique to hibernate Ubuntu instead of resetting.