CD images of operating systems (with the ISO 9660 file system) are often distributed as iso files.

This help page describes how to create USB pendrives, that use this 'grub-n-iso' method to boot directly from iso files. The bootloader is configured to select an iso file for booting. There are some small files for the configuration, and it is quite easy to copy an iso file or several iso files to the pendrive and create a USB [multi]boot drive.

'grub-n-iso' for all PCs was developed for the Ubuntu version 14.04 LTS, which is using grub version 2-02~beta2. Compared to previous versions, it can manage both BIOS and UEFI mode from the same pendrive.

But old style 'grub-n-iso' does not work in UEFI mode.

If you want to boot in UEFI mode and install your Ubuntu flavour alongside Windows, you can use for example the ubuntu-14.04.2-desktop-amd64.iso directly.

There is a good wiki page about booting with UEFI

One pendrive for all PC (Intel/AMD) computers 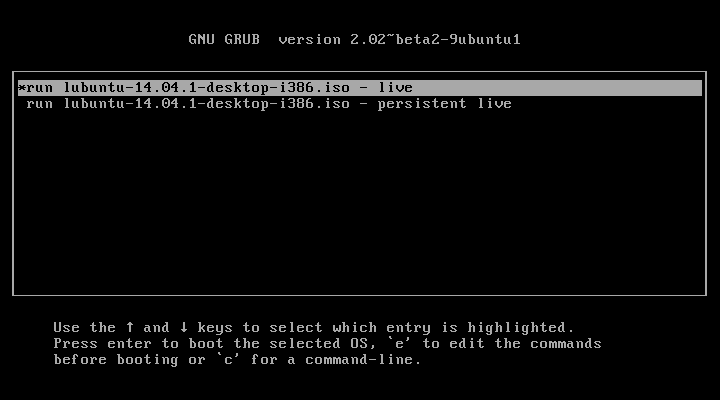 - Similar to normal installation (via 1GB or 2GB USB drive)

- No upgrading between versions is necessary

- Full flexibility, for example to make a dual boot system

- The official Lubuntu and Bento i386 desktop iso files are used, and can be checked with md5sum

- You do not get a complete worḱing operating system directly (Lubuntu)

- You need to install fake-pae using 7bit's ppa after the installation (Lubuntu, Bento has fake-PAE)

- It uses the desktop iso file, while the alternate iso file can install to systems with lower RAM.

This Lubuntu Raring 'grub-n-iso’ system was made for Pentium M and Celeron M, that have PAE capability but no PAE flag. It is harmless for all computers modern enough to have USB. We take no responsibility for any damage, that this software can cause with very old hardware without PAE capability (pre Pentium II).

a. Backup all personal data before trying this method

b. Use it only for computers with old Pentium M and Celeron M CPUs without the PAE flag (mainly if not only laptops)!

c. Check very carefully which drive is the USB drive,

to use as the ‘grub-n-iso’ or ‘grub-n-iso-n-swap’ USB boot drive. Double check and triple check, because dd will overwrite the drive and if you write to a drive with unique data, there is no way to get them back.

It makes it easier, if you disconnect all external drives except the target, the USB drive intended to be the target.

In Linux the following command can help identify the USB drive intended to be the target. Run them one line each time and watch the output to the terminal window.

- notice that upper case and lower case letters make a difference in linux commands, so type exactly like here or cut and paste into the terminal window. Press the Enter (or Carriage Return) key to ‘send’ the command.

In Windows the file browser Explorer can help identify the USB drive intended to be the target. Normally win32diskimager will only select USB drives, which makes it easy, if you have no other USB drives connected. But please check anyway!

d+. The ‘grub-n-iso’ system should work well with 1 GB RAM or more,

maybe with 768 MB. The ‘grub-n-iso-n-swap’ system can install will less RAM, because the swap can relieve some peaks in memory usage. It depends on the computer specs (not only RAM, also graphics chip and other devices, that use memory) if it will work, but you can probably install with 512 MB RAM. This assumption is based on tests in VirtualBox.

we suggest that you get more RAM, or use another method, either the Lubuntu-13.10-fake-PAE install method 'installed system', or the method by mörgæs starting with Ubuntu non-PAE 12.04 mini.iso, fake-PAE, and upgrading to 12.10 (and 13.04 and 13.10). See https://help.ubuntu.com/community/PAE

Right now the image files to download reside on these links

View or download the file md5sums.txt from the same web page.

Check that the download was successful with md5sum according to the file md5sums.txt

Either run the shell-script mkusb from the Ubuntu Forums tutorial "Howto make USB boot drives", which helps you write to the correct USB drive

and you can expect an output like this, if you have installed pv which shows Mibibytes (while dd shows Megabytes.

Or do it manually in the following way

Install a 1GB system to a USB drive

x is the drive letter (no digit). You should write to a drive, not a partition. So instead of x use a letter.

For the first drive of=/dev/sda

For the second drive of=/dev/sdb

according to what you found, when you identified the USB drive intended to be the target.

First check that the download was successful with md5summer according to the file md5sums.txt.

Then write the extracted image file (without the ending gz) with win32diskimager according to the pictures. Win32diskimager looks for img files.

g. Boot from the USB drive and when you have a live system running 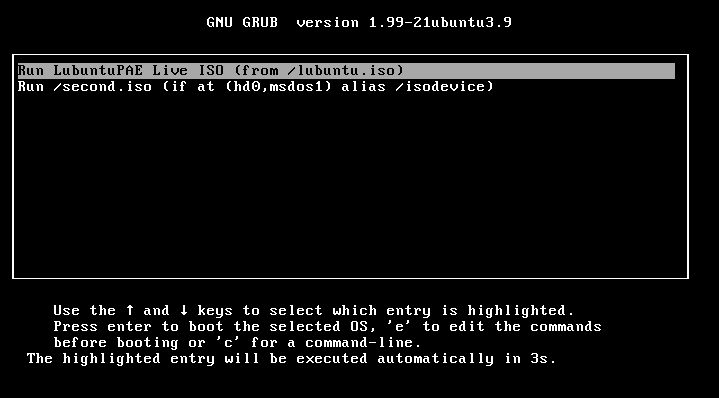 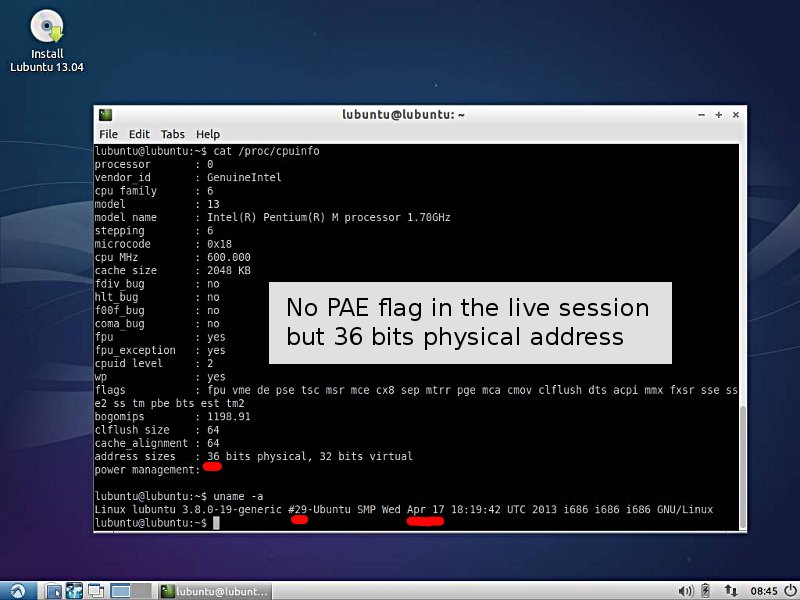 - notice that upper case and lower case letters make a difference in linux commands, so type exactly like here or cut and paste into the terminal window. Press the Enter (or Carriage Return) key to ‘send’ the command.

h. Check that PAE is supported with the following command

and look for address sizes. There should be 36 bits physical address size. If there is, install Lubuntu into the target drive, an internal hard disk drive or an external USB drive. Since such old laptops have no USB 3 or eSATA ports, it will run fastest with the internal drive. The installation works like it would from a normal desktop install (CD/DVD/USB) drive.

i. You should have no partition mounted on the target drive,

when you start the installation.

Check with df. Unmount partitions on the target drive /dev/sdx with the command

If the target drive is a USB drive, don't eject it with the file browser, because then you will probably lose contact with it, and you must unplug and reconnect it physically (and use the sudo umount command line above, if partitions are auto-mounted).

Then when you get this message and question:

"The installer has detected that the following disks have mounted partitions:

Do you want the installer to try to unmount the partitions on these disks before continuing?"

(or maybe you get only "/dev/sdb") you can answer "No, don't unmount anything", because you need to have the partitions on the installation USB drive mounted.

j. When you arrive at the second page of the installer ‘Preparing to install Lubuntu’,

k. When the installation has finished, reboot and install fake-pae by 7bit (for Lubuntu, Bento has fake-PAE)

(You did it a short while ago, otherwise update before upgrading sudo apt-get update)

l. And now you can upgrade the system to the current daily status,

and install the ‘restricted extras’

Now you should have a system, that works as is should, updating and upgrading packages including the kernel. Lubuntu Raring end of life is January 2014. The fake-PAE should survive an upgrade to the next version. But you can look for a new Lubuntu 13.10 'Saucy' for Pentium M CPUs (between October 2013 and January 2014).

m. If you were using the ‘grub-n-iso-n-swap’ method,

you probably have an entry for the USB install drive’s swap partition in /etc/fstab. Use the UUID to identify it.

Remove it! You should use a swap partition on the internal hard disk drive if possible. Swapping on a USB drive is very slow, and only intended to manage rare peaks of memory usage, and you don’t intend to have the USB install drive connected anyway.