Starting with version 9 there are separate versions for

mkusb-minp is simple, the shellscript is rather small compared to the standard mkusb version, only 14 KiB, three times the size of mkusb-min, yet it serves the purpose to wrap a safety belt around 'dd' and to create persistent live drives.

Link to a detailed description to make a persistent live drive: /details

The mkusb-minp shellscript file is available as a file to be downloaded from this page.

Download the attached file mkusb-minp and the corresponding md5sum mkusb-minp.md5.asc.

The file is small compared to standard mkusb,

It should be rather easy to see what the shellscript is doing simply by reading it in a text editor.

The simple check is to run

and compare the result with the corresponding line in the file

You may want a higher level of security. This file is signed with gpg and you can verify it according to the following commands.

The warning "This key is not certified with a trusted signature! There is no indication that the signature belongs to the owner." means that there is no chain of trusted keys between your computer's keyring and the key, that was used to sign the checksums (the key of sudodus). Check that the result matches with the following output, when you verify it,

Then there is reason to trust that nobody else has written the checksums. The date of the signature will change at updates, and the text might be translated to your local language, but it should be clear that it is a 'Good signature from "Nio Sudden Wiklund (sudodus)"'.

If you have the shellscript and the md5sum file in the same directory, you can use the md5sum program to check it like this,

The 'improperly formatted lines' are the lines belonging to the gpg signature.

You can but need not install mkusb-minp. It can be run locally from the current directory.

Then mkusb-minp can be run with superuser permissions (with sudo or as root depending on the linux distro) in the current directory,

If /usr/local/sbin exists in your computer and in PATH, you can copy mkusb-minp to that directory,

Otherwise you can copy it to /usr/sbin, which should exist, and there should be no other program with the same name (except maybe an old version of the same mkusb-minp).

Then mkusb-minp can be run with superuser permissions (with sudo or as root depending on the linux distro) in any directory,

The following dialogues in a terminal window illustrate how to run mkusb-minp, and install live linux operating systems from iso files to a memory card and a pendrive.

Usage text with a list of available target devices 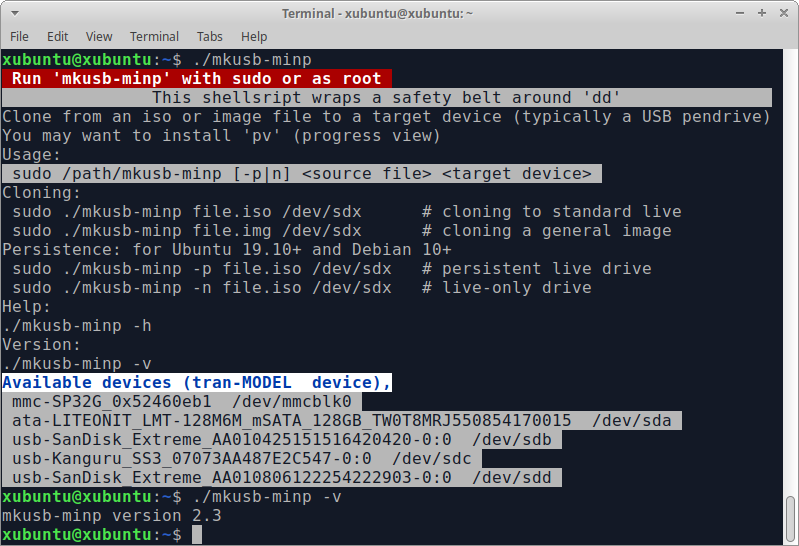 Use the option -p

where X should be replaced by the actual device letter for the USB pendrive.

Use the option -p

Use the option -n

where X should be replaced by the actual device letter for the USB pendrive.

You may ask "Why this option, isn't live the default for a cloned drive?"

The default action is that a casper-rw partition is created automatically and it is mounted to '/var/crash' and '/var/log', so that some of the things you are doing are logged. If you want a purely live-only drive, where nothing will be preserved after shutdown and reboot, you had better

'pv' installed to show the progress;

Cloning from a Tiny Core iso file to a USB pendrive 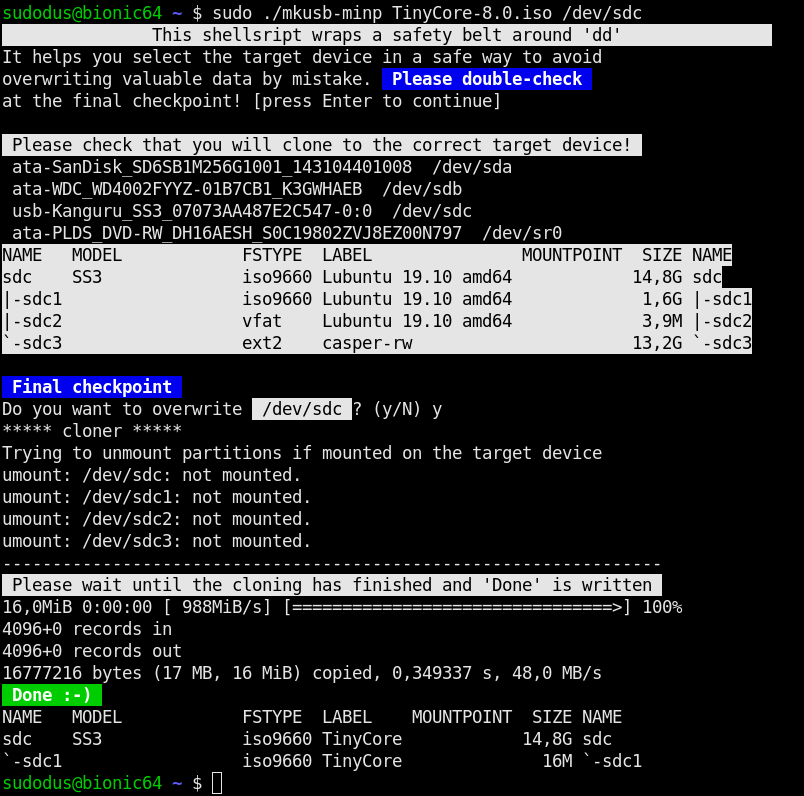 mkusb-minp uses some commands and features, which are not available in old or very small linux distros, for example Wary Puppy and Tiny Core. A version based on mkusb 7.4 is made for such cases - mkusb-bas.