I hope that you have taken time out from reading this book to experiment with some of the synthesizer plugins and to make at least one short recording, not because it's necessary to move on, but for fun. Now we'll review some additional features and techniques of recording in Ardour.

If you have a near-perfect take with one or two glitches, it's possible to set the track to record only a glitch region. Using the Range tool, highlight the part of the track where the glitch is. Then right-click-hold that highlighted area, and choose "Set Punch from Range" in the middle of the dropdown menu that will appear. Two Loop/Punch Range markers will appear in the marker area. Zoom in to make any fine adjustments to where the recording will start and stop. Arm the track for recording, place the cursor a few measures prior to the punch-in region, and you can safely correct the glitch without affecting the rest of the track. One limit to this technique is where there's a sustained sound like a ride cymbal along with the glitch. If there is no break in the music, and the punch-in just isn't right, try recording just the glitch passage to a new track. You can then select and cut the offending region in the original track. This new take is best done in the same session, so all the levels are the same.

Maybe that glitch is happening over a tricky part of the song? You can set a loop with the range tool to rehearse it. But let's review using the pointer tool to select a region. Place the pointer in the selected track at the beginning of the first measure you want to loop and strike the 'S' key to split the track. Repeat this at the end of the last loop measure, then click in between the two split points to highlight the region. In the main menu, go to Region/Loop to enable looping.

You can import a MIDI track or record one from scratch in Ardour. Keeping the note values separate from the audio is useful for a couple of reasons: quantizing percussion and auditioning different patches to play a melodic part. And it's simple to set up. Go to Track/Add Track or Bus, and use the popup's second dropdown menu to specify MIDI. The default label identifies the track as a MIDI track.

By default, this new track is connected to MIDI through and will use the native Reasonable Synth as a sound generator as seen in the Mixer window. In JACK, connect your controller's MIDI out to MIDI Through and you're ready to record the MIDI track.

Now you can open any virtual synth, and assign the MIDI out from the new track in Ardour to it's MIDI in, under JACK/MIDI (click ardour to display the dropdown as in the screenshot below).

Connecting Ardour's MIDI out (left) to a virtual synthesizer (right).

In the Mixer window, set the input of a new track to the output of the plugin being played by the MIDI track, and arm this new track for recording. The plugin will appear under the Other tab (see below).

A MIDI track can be imported like a wav file, and the same technique used to play it or record audio.

Mouse over the very beginning or ending of a track, then click and hold the handle in the upper corner - a curved icon should appear. Drag to define a fade-in or fade-out zone. Note, this technique also works in Audacity.

One of the coolest features of Ardour is the ability to automate track attributes like volume, panning, trim, and muting. Automation will appear in its own "lane" associated with a track. You will create a curve made up of control points (which you can add or subtract as needed). The four modes are manual (overrides automation), play (use the curve to control the parameter during playback), write (set the automation in real-time), and touch (hand-edit only part of the automation curve, leaving the rest alone). To see all of the automation lanes, just click "a" under the track name. The parameters have dropdowns set to "manual" - changing that to "touch" for the L/R (pan) automation lane made it possible to create the curve in the following screenshot by maniputlating the slider during playback. You can read more about automation in the Ardour manual - it can even be applied to instrument parameters! 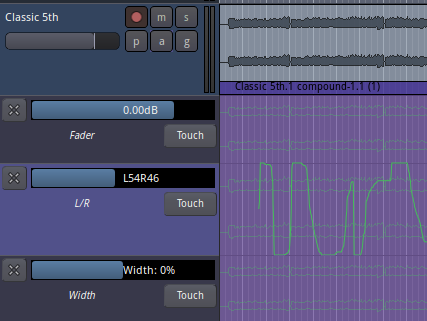 When a song has a large number of tracks, it may be necessary to apply the same action to a subset of those tracks. As you might have guessed, the "g" button next to the "a" button lets you create and assign groups, as well as what properties the tracks will/won't share.

Strings and Sinnah have been assigned to the "Pad Stuff" group, which was made bright green using the color picker we saw earlier. Grouping is also possible when first creating a track.

Creating a Bus and Inserting Effects

A physical mixer has auxilliary send and return "buses" that are typically connected to a rack-mounted effects unit and can be applied to individual channels, with the amount controlled by a pot. Thus the vocalist can sound like she is singing in the shower while the guitar remains dry. Ardour carries the metaphor through, as you may have noticed under "Track/Add track or bus". Let's say you have many hand percussion instruments on five or six tracks and want to apply reverb. Instead of putting a reverb effect on each track, you could create a bus with the effect you want, adjust the sound, and then use the sends in those tracks to apply it uniformly. This can be done pre- or post-fader. Here are the steps:

Setting up a bus is a little bit of work, but not bad for something so powerful. Note that effects can be added per track without using a bus.

It's out of the scope of this book, but video editing is possible within Ardour. You can rip the soundtrack from a video, view it over a timeline, even frame-by-frame, and make all the moves needed to create that Hollywood movie soundtrack of your dreams.

Right-click and hold in a track's charcoal area to browse and add effects. Here a flanger was added to the EP track.

There are two alternate ways of using Windows-only .dll VST plugins in Linux. LinVST will copy the Windows .dll file to a .so file, and they are stored together. A Linux DAW can then read the .so file via symbolic link. Unfortunately, this is only available as a Git repository. If you are not comfortable running a make file and addressing a large number of dependencies, LinVST is probably not for you. After a lot of work, and still unable to run the program, I discovered it still requires a Wine bridge, just like Carla. You can read more about it here: https://github.com/osxmidi/LinVst

The other choice is airwave, but it, too requires Wine. Source code is here:

Since none of these are part of Ubuntu, we won't cover this topic any further. One solution is to "go with what you know" - there is a handful of instrument plugins that run natively on Linux if you want to add to those that come out of the box (http://linux-sound.org/linux-vst-plugins.html also: sort by OS at vst4free.com).