A number of recording applications are available for Linux. Because this book is about multi-track recording, we will focus on two, Audacity and Ardour, both of which can be found on the main "Audio Production" menu. If you mouse over Audacity, the simpler of the two, it says "record and edit audio files", but this belies the fact that you can add as many tracks as you like. Anyone who has used a tape recorder should feel at home with Audacity once the audio input is configured.

Be sure that JACK is running and you have a soft synth like Hydrogen launched prior to opening Audacity. From Audacity's Edit/Preferences/Devices menu, configure it to record from Hydrogen as in the screenshot below. 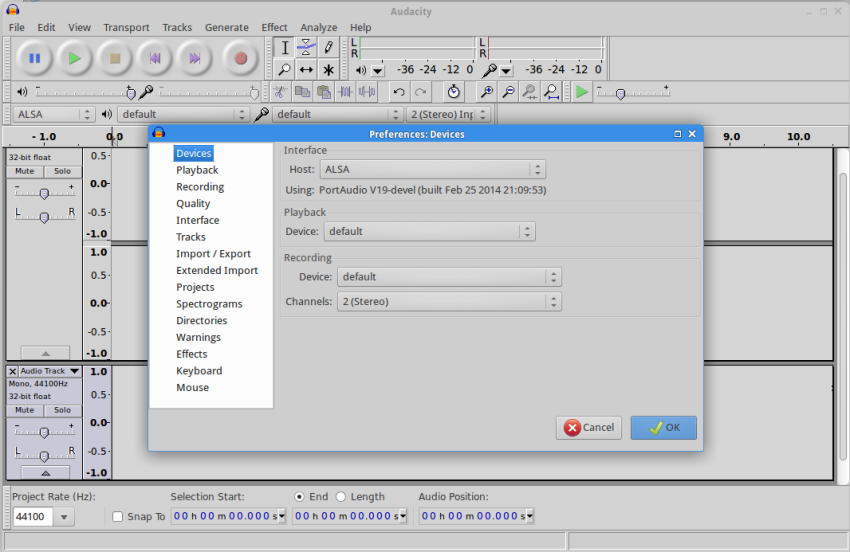 Back in the main menu, select "Track/Add Track", click the record button, and you should see the waveform appear as you play your drum track or other synth. Assuming all went well, here are some frequently-used actions:

Although we are primarily concerned with making digital recordings that tend to be very clean, note that Audacity's noise reduction, also found in the Effect menu, is remarkably good for a project like cleaning up digitized cassette tapes. It works by sampling a bit of the noise, then removing those frequencies throughout the recording. It even provides a way to subtract the noise more or less aggressively, in case you start to hear the filtering encroaching on parts of the signal you want to retain. We will see other tools that can target problem frequencies when we discuss mastering, but Audacity's noise reduction is simple to use and produces impressive results. Another strength of Audacity over other recorders is that it can export to any format imaginable. It may not be your primary DAW, but Audacity has many specialized uses. The manual (under Help) covers all of Audacity's capabilities clearly and succinctly.

This is as good a time as any to suggest http://freesound.org for all manner of sound effects (and a fair number of loops) that you can import directly into any recording project. If you are not familiar with that site, I suggest you pop in a bookmark here and go check it out. If you are making a test recording in Audacity, take a moment to try importing a file from freesound.org into its own audio track in Audacity as an exercise

If you have used a Digital Audio Workstation (DAW) such as Ableton, Cubase, Cakewalk Sonar, Logic, Reason, or FL Studio, then you will be in familiar territory with Ardour. As with most freeware and shareware, Ardour may not have all the latest bells and whistles, but make no mistake - this is a full-featured DAW, and will give you professional-quality results. Personally, I like it that open source software evolves more slowly - it is less susceptible to feature bloat than commercial products. Ardour has two main windows, an editor and a mixer, shown below.

Ardour's track editing view has familiar features - transport and editing tools, clock and measure readouts, metronome, and a timeline where you can set the meter, tempo, and place markers. New tracks are added below "master" in the above screenshot. 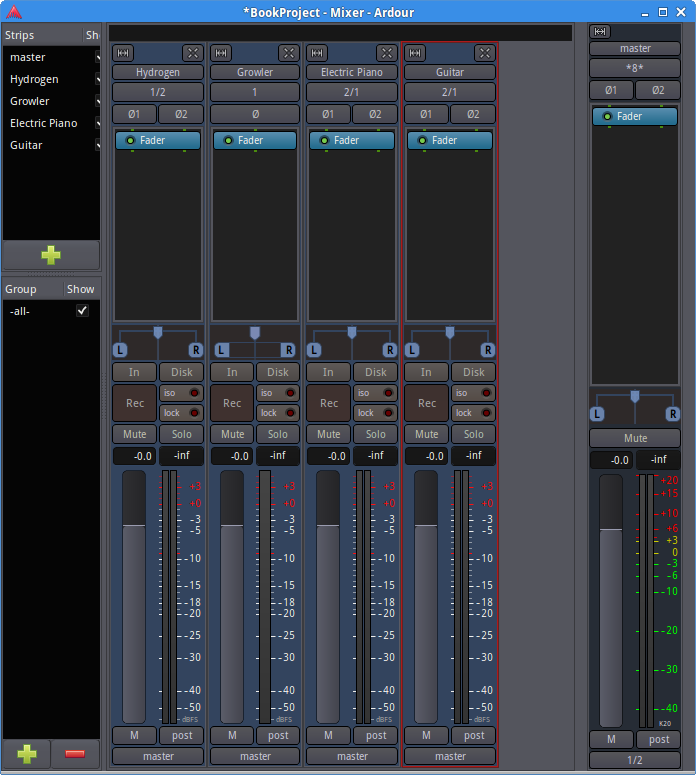 Ardour's mixer window, above, not only sets individual track levels, but also allows for inserting effects pre- and post fader. Input from JACK can easily be assigned via the button just below any track's name. 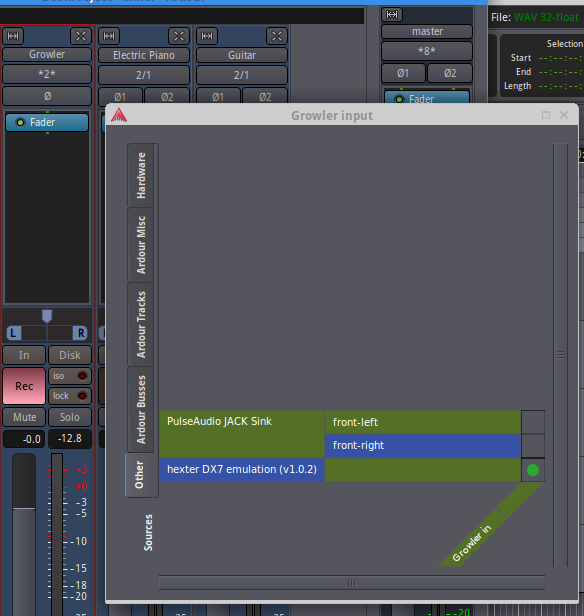 Above: the mixer button with the asterisks (top left, *2* just above Growler) was clicked to reveal the pop-up (shown) where the track input (green diagonal) can be connected to the Hexter plugin, found on the "Other" tab at bottom of the pop-up's vertical lefthand menu. Clicking the Rec button turns it pink, indicating the track is armed for recording.

Once the input is set, return to the track view tab, hit the red "record" button in the transport section, and recording will start as soon as you click the "play" arrow. On both Ardour and Audacity, the space bar can be used to start and stop playing. Ensure that Ardour's Master outs are connected to "System" in JACK, return the cursor to the start of your recording via the left-arrow transport button, and play back your first take.

Now let's take a closer look at track settings. In either the main window or the mixer, you can change a track name by clicking on it. Ardour automatically assigns each track a color, but you can alter that and other track attributes from a menu that appears on clicking in a blank area near the track name in the editor window 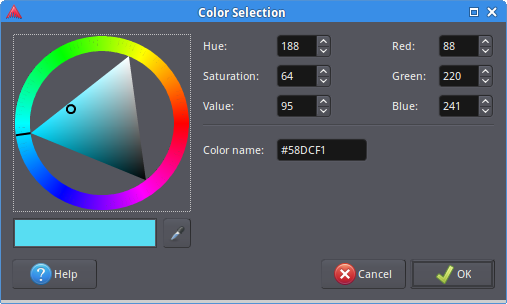 Next to the record enable button on each track are buttons for mute and solo ("m" and "s" respectively). We will discuss the bottom row of buttons in the chapter on advanced recording. The pointer tool (green button in image below), can be used to drag a region to a new location in the timeline. Clicking and holding the edge of a track with the pointer tool will resize the track. To start playback in the middle of a track, click in the area above the master track, then hit the space bar.

To the right of the pointer icon in the toolbar is "region mode" which can be used to select/move regions with the cursor. There is also a "smart mode" to imbue the pointer tool with this ability. I have not found myself using these alternate modes much, but you should try them out to see how they alter the cursor's behavior. It should be clear what the Grid and Beats menus do (just try them). The Playhead menu sets the starting position of the cursor to either wherever the mouse is, an active (selected) marker, or the beginning of the song. This feature can be useful when working on longer and more complex tracks. More playhead options are under the main Transport menu. Hydrogen does not play well with JACK running, but recall that you can export a Hydrogen song to a wav file. To import a wav file into Ardour, use Session/Import to navigate to the file; open it, and it will appear on a new track. It is best to learn the keyboard shortcuts as soon as possible to avoid return trips to the edit menu. Copy, paste, and undo are the same as in a typical word processor. To split a selected track, place the cursor in the desired spot (you may need to zoom in with the magnifier tool first), and hit 'S'. If a track has many isolated regions, sometimes they all need to be moved at once. This can be done by selecting the track and using Edit/Combine, which will also prevent inadvertently moving part of a track and allow for making global changes like normalization. Ctrl-up or Ctrl-down will move a selected track up or down the track list, and click-dragging the track's edge - i.e. within the list area - will adjust its height.

To export a track, first make sure the start and end markers are where you want them and return the playhead to the start marker. Then select "Session/Export to audio" from the main menu and follow the instructions from there to pick a destination directory for your file. Tracks that are muted will not be included in the export. Note that you can export the whole song or export individual "stems" (tracks). The latter is very useful when collaborating with another musician or producer/engineer.

Other DAWs for Linux

If Audacity and Ardour are not to your liking, there are other options. LMMS is available in the Ubuntu Software Center and is a simple install. It is somewhere between the two recorders we just looked at, and has a colorful, quirky layout. LMMS boasts native support of VSTs, and comes with some nice pre-installed plugins. It is not as full-featured as Ardour, but a bit less complicated and free. https://lmms.io

Renoise has a $75 license fee. It uses a unique vertical scrolling tracker and uses QWERTY keys as the keyboard. Check out the tutorial video at: http://renoise.com/products/renoise

You can get Reaper for $60 (60-day free trial). It's sleek graphic design recalls, well...Ardour. Reaper also supports VST plugins. I have never used it, but there are a number of video tutorials on their site: https://www.reaper.fm

Bitwig, Computer Music's DAW of the year for 2017, will set you back $300. Always check the hardware requirements before you buy any software. The design looks modern with a lot of customization efficiently embedded in multi-purpose controls. Glancing at the video tutorials suggests a big learning curve is in store. But it is popular and it runs on Linux.

Don't forget to read the latest news about Ardour. Here is a theme pack that includes themes called "ableton-like", "blueberry-milk", and "cubase-like": https://community.ardour.org/node/13685 if you are more accustomed to one of those DAWs or just don't like the default skin. [Note - I have not tested these skins] https://ardour.org/whatsnew.html

Who knows what options will come down the pike? You can even install a DAW on a tablet (check your available space first!). It is probably a good idea to find one DAW that suits your needs and stick with it for a while. While it's true they all have things in common, as this book illustrates, there's always the buried menu item or secret command. Why learn the ins and outs of many DAWs when they all give you a similar result? Also, in making comparisons, bear in mind we have only scratched the surface of Ardour's capabilites in this chapter. Ardour's online manual is far more thorough and very well-written.

We have covered the basics of multitrack recording in Ubuntu Studio. Now let's have a look at non-native plugins to broaden our selection of sounds and instruments.