Gear on a Budget

When I was a teenager, I started just playing the piano. I saved up my lawn mowing, snow shoveling, and leaf raking money to buy a little combo organ, and could only dream of owning a real synthesizer. I used gig money to modify the organ with one big purchase – an Electro Harmonix Phase Shifter! Who were the lucky kids who could afford that Concertmate MG-1 (made by Moog!) on display at Radio Shack? 'Teenaged me' would be gobsmacked with capabilites of soft synthesizers. Things got a little better in the 80's, but most weekend warriors were still not going to purchase more than one or two keyboards, meaning we would never get past trying out some boards at the music store. Now there seem to be more emulators (some highly accurate, others less so) of more vintage keyboards than we'll ever have time to play. But could 'teenaged me' afford to “go digital” today? With an eye towards this question, let's have a look at the minimal gear outlay for running Ubuntu Studio.

So the bare minimum outlay, assuming the two pricey items are purchased used, would be around $165, certainly below $200 (estimates based on web 2018 web searches). Considering what 'teen-aged me' could charge for shoveling snow these days, I'd say that's well within anyone's grasp. Of course, you can spend $300 on the sound card alone, and certain 'designer' headphones can cost as much as $350. If you buy everything new and consumer-grade, think in the range of $700-900 to completely outfit your bedroom studio from scratch.

How to find out if your old laptop can run Ubuntu

Linux does not run on every system. Fortunately, there are convenient web sites where you can look up your hardware to see if others have successfully installed Linux. The following resources also have installation notes:

For the first draft of this book, I used a decade-old Dell Inspiron 1420 laptop running Ubuntu Studio version 14.04.05 LTS. It has a duo 1.5 GHz processor, 2 GB of RAM, and 145GB on the hard disk. Most used laptops have more horsepower than that, and you'll need it to run a more recent version of Ubuntu Studio. If you also have an ancient relic, all or most of what follows should work for you. Whatever hardware you end up with, check that it meets the requirements on the following page. In Windows 10, you can get the information via Settings/System/About.

Before running the installation, you might want to check that your computer has the minimum requirements.

By now you should have a computer and soundcard. If you're still unsure about whether Ubuntu will work on your system, or just want to give it a test drive prior to committing, it's possible to run the system from either a DVD or USB drive – this is one of the startup options on the same disc image we'll use to run the full installation. The steps are:

The Ubuntu Studio site has further installation instructions and details, but the process is self-explanatory save one step: changing the way your computer boots up. To boot from a DVD:

After having a look at your new system from media, restart again with the DVD still loaded, and pick the type of installation you prefer. A “clean install” will erase everything from the old computer, but this is recommended. We won't cover the dual-boot scenario here, other than to say you will need to know about creating disk partitions if you want to set it up that way. From here, there are not a lot of steps, but allow yourself 30 minutes or so as there are a lot of files to transfer. Here is what to expect:

Now you should take a moment and check out the non-musical software that comes with your new operating system, noting there is nothing mysterious about it. Ubuntu follows the standard concept of a launcher with icons that open assorted applications. A screenshot of the menu is on the next page. Start by opening Office. This book was written using Libre Office Writer. You'll notice it looks a bit like Word from a few years ago. Open a new document (File/New/Text Document). Enter some text in the white space and highlight it with the mouse. Guess what happens when you click the very large letter 'B' in the toolbar? I hope you can take it from there.

Before we leave this section, familiarize yourself with the Ubuntu Software Center. There you can find a library of applications by category, with user ratings – almost anything you can imagine is available, and programs self-install at the click of a mouse. Have a look, play around with your new computer, and when you're ready, we'll do the finishing touch of setting up the sound card.

First, all of the hardware connections need to be made. Connect the MIDI controller and the outboard sound card to USB ports on the laptop. For now, you can connect headphones to the sound card, being sure to set the volume level relatively low and keeping them off your ears until we're sure the levels are reasonable. If you have speakers, connect them directly or via mixer now. Many sound cards and controllers are powered via USB, so the only thing you may need to plug in is the laptop. Note that your monitors should be off or volume set to zero when powering down the laptop. If you want to record an instrument, that usually goes into the front panel of the sound card. Be sure to consult the sound card's manual for appropriate settings. In general, “Pad” is for boosting the signal from a microphone. There might be an additional switch between “Line” and “Instrument”. The latter should work for electric guitar. Pots may need to be adjusted for different input sources.

Connecting a Sound Card With JACK and Patchage

The program called JACK is Ubuntu Studio's nerve center. From the launcher, click Audio Production/QjackCtl. Click Setup/Settings/Advanced to show the window on the following page. There's good news and bad news. The good news is that the default settings should work as-is for most sound cards. The bad news is that if they don't, it may be difficult to find specific instructions to tell you what works for your particular hardware configuration, and you may end up finding it by trial and error. On my system, there are seven options under input and output. The first time I tried to connect my sound card, using an earlier release of Ubuntu Studio, it took over an hour and some poking around the user forums. But in later releases, it was plug-and-play.

Under Parameters, I chose Alsa, Realtime, and the default Sample Rate (44100) Frames/Period (1024) and Periods/Buffer (2). Latency is grayed out at 46.4 msec, as I choose the low-latency option (recommended). Although I have a 64-bit processor, I have experienced some trouble running 64-bit programs under Windows in Ubuntu – we will come back to that point when discussing Wine and Carla in chapter 5. With luck, your system should be ready to go now. 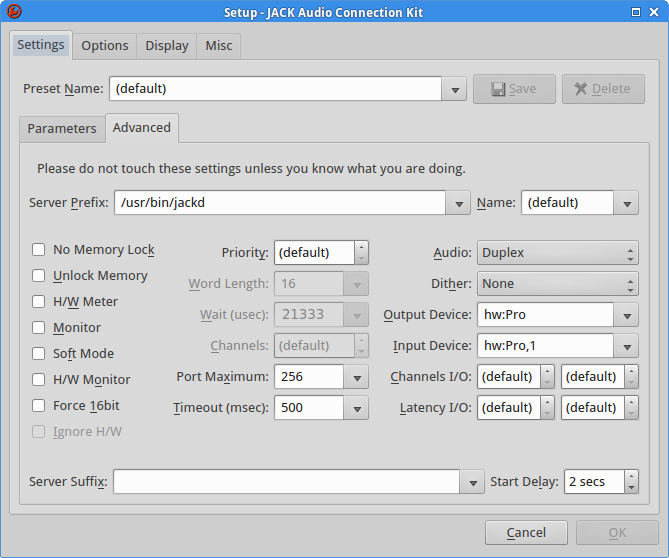 The JACK advanced settings screen – this may or may not work for a given set of hardware. Details on the rig used for this book are in the appendix.

Making connections in JACK is covered in the next chapter. For now, return to JACK's main panel and try the Connections and Patchbay buttons. A good workflow is to set up Connections, then go into Patchbay and store a given configuration that you might want to call up again when working on a particular style of music. There isn't much to do in either of these windows until we open other applications. IMPORTANT: one last preliminary step will help later - see this link: http://manual.ardour.org/setting-up-your-system/setting-up-midi/midi-on-linux/

In Ubuntu Studio 20.04, Ubuntu Studio Controls is a much improved interface for creating connections in Jack, even with non-Jack-compliant applications. Set the CPU Governor to "Performance" to assure your system is running low latency for audio. Full documentation: https://help.ubuntu.com/community/UbuntuStudio/UbuntuStudioControls.

NOTE: Patchage has been dropped from Ubuntu 20.04 due to the removal of Python2. Carla can be used for graphical patchbays such as Patchage.

You can use it to hook things up, as well. We're not quite ready to use this, but here's a preview. 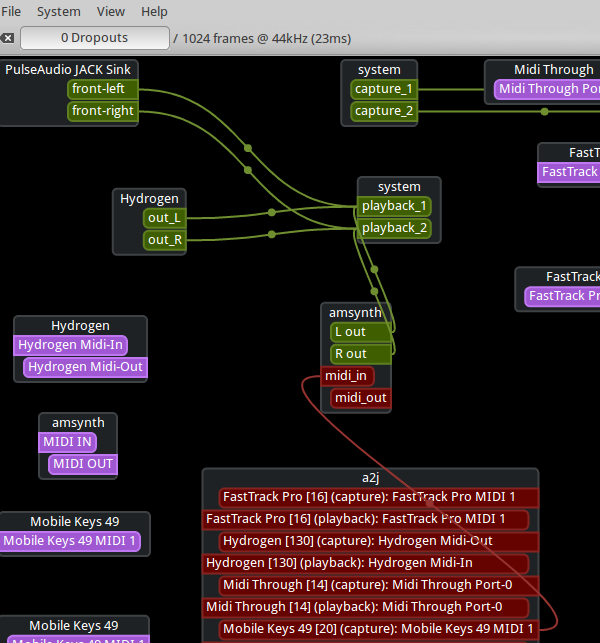 Here a MIDI controller is connected to a amsynth, a soft synthesizer's MIDI input, the Hydrogen drum machine and amsynth's audio outs go to the system output, which we've already configured in JACK to use the outboard soundcard.

The audio generators depicted above are introduced in the next chapter, so read on!