By now you have seen quite a few virtual synthesizers with a bewildering array of GUIs. In this section, we will try to see what they all have in common with the goal of being able to modify and create patches.

In the most general terms, a synthesizer is an electronic instrument that sends one or more pure waveforms through a pipeline of filters and other processors to modify and mangle that waveform. The classic starting points are the sine, the square, the sawtooth, and noise. Pulse and triangle are also fairly common. Some hybrid waveforms are not unusual, and as we saw in Zebralette, some instruments let you draw and stack waves to produce very rich sounds. These geometric names are derived from how the sounds appear on an oscilloscope, which shows voltage over time, allowing analysis of things like frequency and amplitude of a signal. The pure tone is a single frequency sine wave (note that the other wave shapes can be constructed from sine and cosine waves). In theory, by crafting sounds the right way, it should be possible to recreate sounds of real instruments and nature. In practice, with a few exceptions, analog synthesizers can only approximate "real" instruments. Highly convincing, realistic patches were brought about in the 1980's by sampling synthesizers, which could be argued as cheating, since a sample, as we've seen, is just a little digital recording (and having a precise clarinet sound only showed how the keyboard could not convey all the subtleties of the human mouth tooting on a slobbery reed). In any case, it helps to listen to the unmodified waveforms to get a feeling for the starting point - many plugins have a plain vanilla initial patch that is a pure tone. A sine wave sounds like whistling or blowing across the top of a bottle, a sawtooth wave sounds a bit like it looks - like a buzzer. White noise is static and can be used for sound effects like wind or ocean waves and percussion sounds.

The short explanation for a 1970's analog synth's inability to recreate natural sounds is that those sounds are composed of many overlapping waves, not just one or two. The long answer involves complex Fourier analysis of sound waves. But synthesizers opened up a whole new world of strange and novel sounds that gave birth to electronic music as we know it today (with proper credit to early studio pioneers who were happily making what can only be called electronic music well before the invention of the modular synthesizer).

The timbre of a patch is comprised of its spectra (those waveforms) and its envelope (fast or slow attack, ringing or abrupt ending (decay), etc - drum hit versus a bell versus a slow violin crescendo). So creating your own sound is just a question of figuring out how to mess around with those two elements of timbre on any given synthesizer. A perfectly valid approach to this is to stop here, and just start "knob twisting" at random, hitting "save" when you get a pleasing result. You will soon learn what "LFO" does, even if you don't know that it means "Low Frequency Oscillator" - and after all, does knowing what the initials stand for help much?

Here are ten quick ways to modify the basic waveforms on any synthesizer. These won't make you an expert sound designer, but hopefully will de-mystify all those crazy knobs and initials. Not every synth has all of these capabilities.

Ten things to try on any synthesizer

So far, this discussion has focused on analog synths because a lot of free VSTs are analog emulators. There are many different approaches to sound synthesis, and the description for each plugin will say which type of synthesis it is are using. Some instruments purposely take a radically different approach to either the interface or to sound generation or both. For me, the more quirky and experimental, the better. But occasionally, a plugin is just impenetrable. In that case, just go with the presets or move on. You should not have to battle a synth just to tweak a patch. On the other hand, it is only fair to read the manual. I mostly stick with presets, but still feel a passing familiarity with the history of how synthesizers have evolved, the lingo, and the capabilities is important - a short list of resources appears in the appendix. Go forth and knob-twist!

Here are very brief descriptions of some of the major types of synthesizers that you will see recreated as plugins. Between other methods not mentioned and hybrids, this is just scratching the surface.

Let's apply some of the above ideas to make a simple funky bass, a classic analog synth sound. This need not be polyphonic, and it will have a very short, almost clipped envelope. It needs to be thick and needs to go "BOW-BOW-BOW", which effect will be achieved with a filter. We'll use the highly-rated Synth1, modeled after the Nord Lead Red. Download it to your VST directory from here (note 32 bit versions often work better than 64 bit): 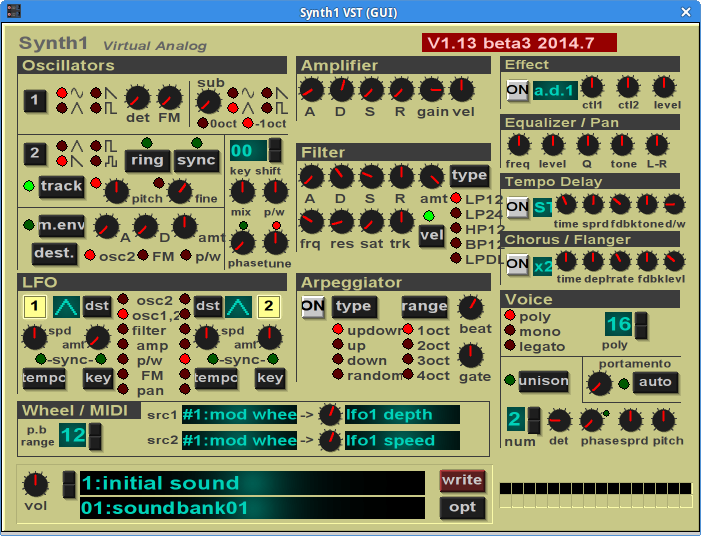 Notes on the Funk Bass setup:

This plugin has very clearly marked "Arpegiator [sic] Gate" section at bottom right. Just click the "OFF" button so it changes to "ON" and turns red. Then play around with the controls in that section. Note that "HOLD" will keep the pattern playing even after you release the keys. Experiment with the other controls to vary the tempo and direction of the arpeggio. TR-GT mode lets you space chordal hits on a timeline, and they can be more or less legato.

The following setup modifies a noise signal. The envelope is set something like a crash cymbal, but instead of a static filter setting, LFO1 and LFO2 are controlling the filter. Adjust the rate on the LFOs to your liking, or click the dropdown that says "Filter" to disable them. Note that Master/Sub is turned all the way down. 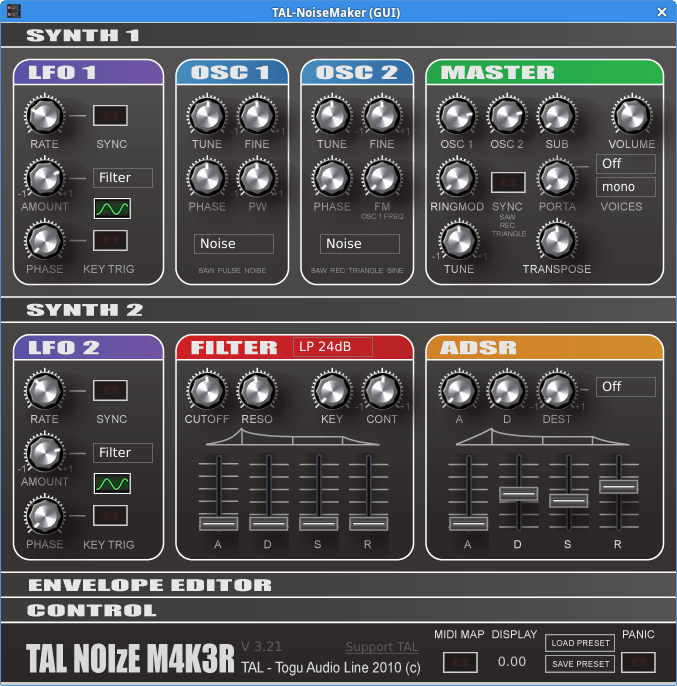 Disabling LFO1 and 2, slightly raising the Cutoff and Resonance, and shortening the envelope turns our wavy crash cymbal into something more akin to a hand-clap.

And what discussion of noise patches would be complete without the Helicopter sound effect? This one fades into the distance when you release the key. 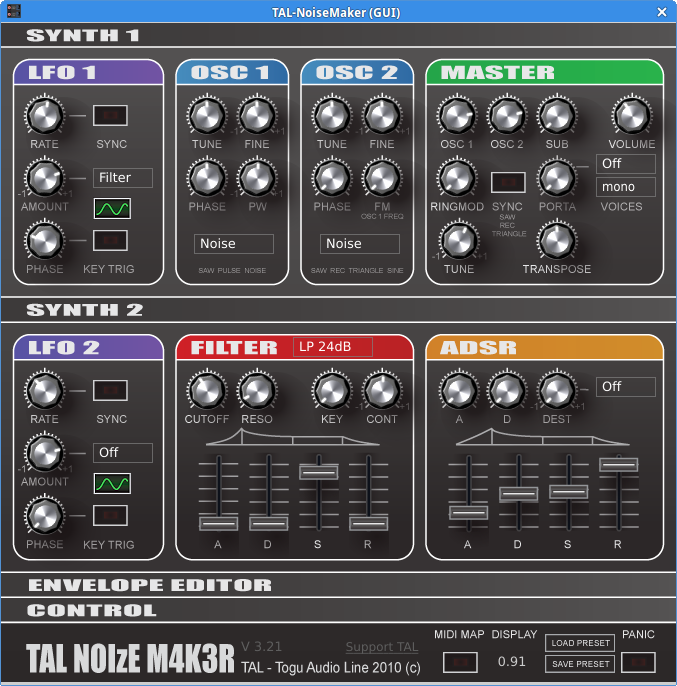 Minor modifications to the envelope and other controls can change plain noise into different percussion sounds or sound effects.

Here is an example of controlling the pitch of an oscillator with the LFO. Install Pure Pone from here: http://www.vst4free.com/free_vst.php?plugin=Pure-Pone&id=877 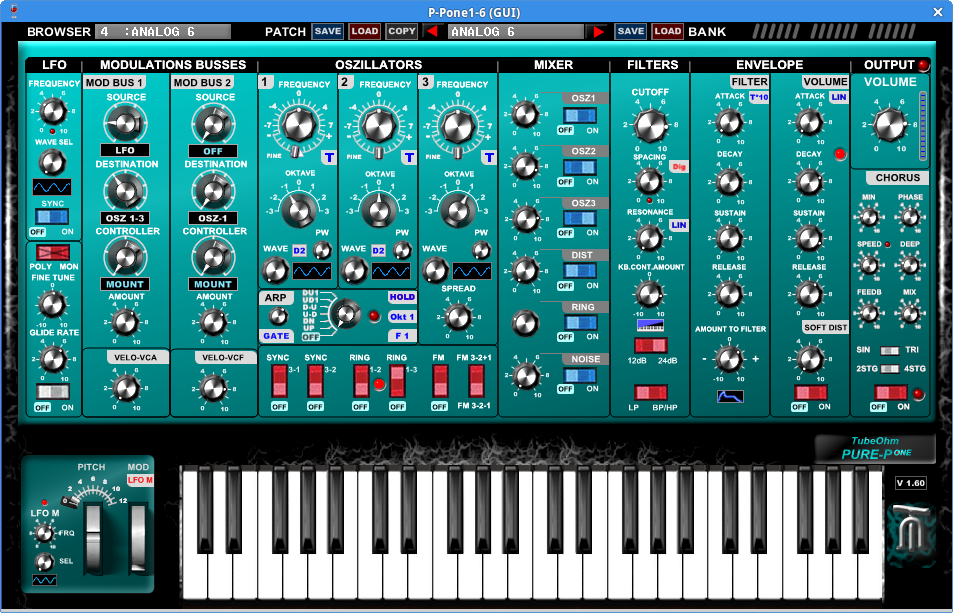 Certainly not the most musical setting, but a good demonstration of how to modify a parameter from another parameter, the essence of synthesizer programming.

You should hear a slow rising and falling pitch.

I had a little trouble finding a plugin where it was simple to make the Siren patch, but I hope these examples were enough to illustrate that there is a lot in common from one plugin to the next in editing and creating patches. One or more sources (oscillators) is modified by various signal processors and effects, some of which may themselves be waves, some will be filters. Once the wave is shaped, it goes through the ADSR envelope, the the master volume control. Usually, these controls are in some kind of sectional arrangement. It just becomes a question of figuring out how to assign them. With a little practice, you will be able to imagine a sound and have a rough idea of how to build that patch from scratch. While there is nothing wrong with using presets, as you can see, a tiny twist of a single knob can dramatically alter what you get from a given patch. Presets are intended to demonstrate the capabilities of a plugin, so don't be afraid to mess around with the controls. Any synth developer would tell you "that's what they're there for!"

The opening preset of Osiris-6, "Delay Pad" is a perfect example of a sweep effect with a slow attack.

Osiris packs a lot of sound editing capability into a relatively easy-to-follow layout. Two oscillators are on the left. The yellow buttons rotate through all available options. You can pick filter 1, 2, or both. And the panel outline suggests that the filters have their own ADSR, which is above the ADSR for the gain. To the left of the keyboard is the mono on/off and portamento control. Tucked to the right of the keyboard is the arpeggiator. Effects are front and center. It is very easy to page through the options for LFO1 and LFO2 as you listen to how the sound is affected in real time. This is truly one of the best designed front panel layouts. Osiris shines in the pad department, but the cutoff and resonance knobs do not seem to alter those sorts of sounds much. One drawback of this plugin is that it appears to take up a lot of memory - it failed to load four times on my old laptop. Download it here: http://www.vst4free.com/free_vst.php?plugin=Osiris-6&id=741