The versions 9- of the mkusb tool are still bash scripts. The menus and dialogue windows are purely graphical using zenity.

There is also a text console for output from the engine behind the zenity curtain.

from the normal PPA

If you want standard mkusb with a graphical user interface

if you want to get usb-pack-efi (used when you make a persistent live drive; makes it possible to boot 64-bit and 32-bit versions in EFI mode)

if you want the new mkusb-plug package

and if you want all these packages

from the unstable PPA

This version is still developed and debugged. It is available from ppa:mkusb/unstable via the following command lines,

that will install the bleeding edge version of mkusb and/or mkusb-nox (testing new features and bug-fixes).

If you want to try only the new interface dus, 'Do USB Stuff', you can install one of the following packages,

Normally you want to keep an installed system up to date automatically, via a GUI application or the following command lines,

and maybe the following command (if problems)

Then all installed packages (from standard repositories and PPAs) will be upgraded.

But a live-only or persistent live system can be damaged by such general updates & upgrades. Instead it is recommended to keep most program packages as they are, and only upgrade packages when really necessary. The following command lines work, when you want to update & upgrade the program packages that belong to mkusb without affecting the other program packages.

If there are still problems, you can purge mkusb

After that it should work according to the instructions above.

The following link describes how to use the stable PPA in Debian ../install-to-debian.

Add the following line to /etc/apt/sources.list in order to use the unstable PPA in Debian and distros based on Ubuntu or Debian,

You should also import a gpg key, which is used to verify the packages, that you intend to install,

You could add the PPA version for a current version, instead of your current release. The mkusb PPAs are the same, because mkusb is only a bash shellscript with some help files, and all these files are independent of the version and flavour of the gnu-linux operating system.

You can download one of the following tarballs (compressed tar files) and check the md5sum, that it was downloaded correctly. This option is the second alternative, when it does not work to use the PPA or you do not want that. The version is/was up to date when uploaded, but it may not be updated at the same time as the PPA, and it is also limited to dus with guidus alias mkusb version 12.

You can download tarballs from http://phillw.net/isos/linux-tools/mkusb/ It might bring the same bleeding edge version as you get via the unstable PPA, and sometimes a newer or older experimental version.

mkusb-min if you want it simple

If you want it simple or do not want to install anything unknown, yet want to 'wrap a safety belt around dd', you can use mkusb-min. It is a small shellscript, that is easy to read and understand. It needs no installation, you can run the shellscript locally (in the current directory).

See the detailed description at ../min.

Simple to test mkusb in linux distros, which do not manage an Ubuntu PPA

It is simple to test *1) in linux distros (operating systems), which do not use Ubuntu PPAs. The script from phillw.net downloads, checks and installs mkusb using only standard commands. It even checks itself and that the md5sum file was signed with a good signature by sudodos (me). The script can also remove what it installed. Installing via a tarball is even simpler and should work in most cases.

*1) mkusb may fail in linux operating systems, where it is not yet tested.

*2) mkusb-dus works, but mkusb-11 can only use a simpler display, 'legacy mode' (without colours and other html features, because Zenity lacks the --html option).

*4) mkusb-nox works without any tweaks when running as root in Debian Jessie (tested with debian-jessie-DI-rc1-amd64-kde-CD-1.iso). mkusb-dus 12.3.3 and newer versions work in the Debian versions 8-10 See ../install-to-debian.

Use mkusb 7.5 alias mkusb-nox in distros, where zenity does not work. If you prefer this command line version, for example if you are an Arch linux user, you will find that mkusb-nox can use the pacman installer and suggests to install pv. Use the basic mkusb-bas where none of the more advanced versions of mkusb works.

mkusb is tested with the following iso files / distros, and can install them live-only. Details are specified in each case according to the list,

Other iso files with limited compatibility for mkusb

There are separate versions for

This avoids some complicated logic and makes the code smaller. Maybe 90% of you will prefer the GUI version, but the text version is good for servers and for users who do not want eye-candy. The improved recognition of systems and devices is back-ported to mkusb-nox. See this pdf manual.

Easier to use and to maintain

The intention with dus is to make it easier to use and easier to maintain. Some features, that nobody has commented on and very few have used, are removed. The user interface is much easier to use compared to mkusb and mkusb-nox. For example, there are no 'toggle' menu entries, and the style is 'wizard' with the tasks following each other.

The 'final checkpoint' is changed for a special reason: The current mkusb version with coloured background is good, but it depends on zenity's support for html, which has failed for long periods of time more than once during a couple of years. The new version should be as safe as before, and it is only using basic zenity features: the 'Go' radio button must be selected and the 'Go' button must be pressed).

Should work with minimal instructions

guidus is a GUI front-end to dus. It provides a desktop file, that is available via the menu system in many linux flavours or dash in Unity. The graphical mode will be selected automatically for most users (running graphical desktop environments) 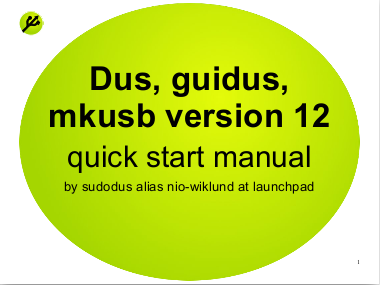 dus should work with minimal instructions. It might not look as good as the current mkusb version, but it is possible to remove some rough edges. Of course we can expect bugs at this stage, but I think it will soon surpass mkusb in user friendliness.

Use mkusb-nox or dus, when you login remotely for example via ssh.

or in graphical mode, if the server can manage it and zenity is installed (in the server)

The default font in monitors with 2560x1440 or 3840x2160 pixels may be too small in Ubuntu Desktop and the Ubuntu family flavours. mkusb-dus version 12.6.3 can modify the font size for high resolution automatically (size of zenity windows and font of text, which can be controlled via zenity). Some text cannot be controlled this way, but via the general font settings. In mkusb-dus version 12.6.4 control of font and window size for the xterm console is added and for zenity it is improved.

In Ubuntu 20.04.x LTS with Gnome desktop environment you can use gnome-tweak-tool and increase the default fonts from 11 to 16, which should make the text nice in many application programs. There are corresponding methods to increase the font size in the Ubuntu community flavours (Kubuntu, Lubuntu ... Xubuntu).

This is matched by the automatic logic in mkusb-dus.

However, if you use the shortcut by the Ubuntu Settings tool and select Scale 200%, or Fractional scaling the automatic logic of mkusb-dus will believe that the font is still too small, and make the zenity windows (and font, that it can control) very large.

In this case you can select manage Zenity window and font size from the starter menu of dus (mkusb-dus), and then select Fixed size of zenity windows and fonts from the submenu. You will probably be satisfied with the default font size, but you can increase the size if you wish. 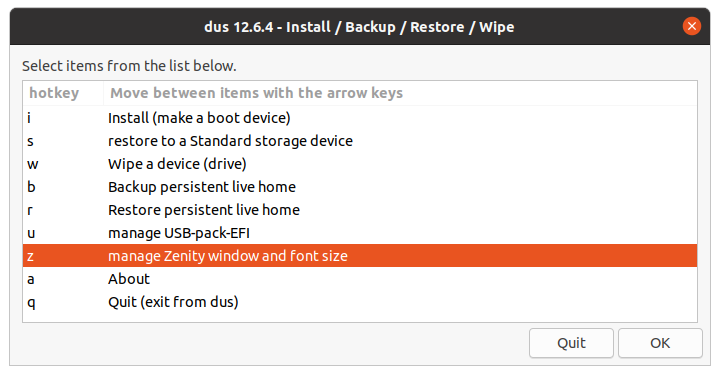 Add an option for DPI

The following link to the Ubuntu Forums can be helpful [not only] for users of Lubuntu 20.04.x LTS with an nvidia proprietary driver,

Summary: Add an option for DPI to the file (modify if you use another file name '10-...conf')